The first pictures of exoplanets

HR8799 and its consorts
This is one of the first picture taken of planets outside our solar system. It shows an exoplanetary system comprising three planets, has been directly imaged, circling a star called HR8799 in the constellation Pegasus. What may look like a few fuzzy blobs is something truly amazing in my view.

In addition the http://news.bbc.co.uk/1/hi/technology/7725584.stm BBC reports that both visible and infrared images have been snapped of a planet orbiting a star 25 light-years away. The planet is believed to be the coolest, lowest-mass object ever seen outside our own solar neighbourhood. Being able to directly detect the light from these planets will allow astronomers to study their composition and atmospheres in detail. Advances in optics and image processing have allowed astronomers to effectively subtract the bright light from stars, leaving behind light from the planets. That light can either come in the infrared, caused by the planets' heat, or be reflected starlight. 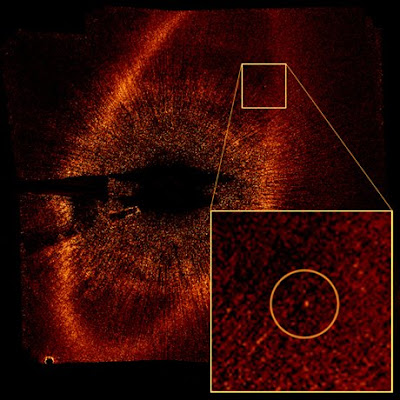 Paul Kalas of the University of California led an international group that used the Hubble Space Telescope to image the region around a star called Fomalhaut. The star has a massive ring of dust surrounding it that appears to have a cleanly groomed inner edge. That is in keeping with what is known as accretion theory - that young planets gather up dust and matter as they orbit - and prompted the team to begin looking for the suspected planet in 2005.

The team estimates that the planet, dubbed Fomalhaut b, is 11bn miles away from its star, about as massive as Jupiter and completes an orbit in about 870 years. It may also have a ring around it. "I nearly had a heart attack at the end of May when I confirmed that Fomalhaut b orbits its parent star," Dr Kalas said. "It's a profound and overwhelming experience to lay eyes on a planet never before seen."

Christian Marois of the Herzberg Institute for Astrophysics and his team used the Keck and Gemini telescopes in Hawaii to look near HR 8799. The team looked for light in the infrared part of the spectrum, hoping to spot planets that were still hot from their formation. What they found in 2004, and confirmed again this year, are three planets circling the star.

According to a theoretical model that accounts for the light coming from the planets, they range in size from five to 13 times the mass of Jupiter and are probably only about 60 million years old. The trio have similarities with our own solar system. Their orbits are comparable in size to those of the outer planets, and the smaller planets are those closest to the sun - again suggesting a system that formed through accretion.

Dr Marois pointed out that the current methods used in the exoplanet hunt are sensitive primarily to Jupiter-sized planets and larger. "We thus do not have a full picture. The detection of the three planets around HR 8799 does not mean that no planets are orbiting at smaller separations. Other gas giant or even rocky planets could reside there."

The study of the light directly from the planets will yield information about their atmospheres and surfaces that is impossible to collect from planets discovered indirectly.

Very exciting! We've known all along that there must be planets out there - but to see them is incredible! I never thought I'd see pictures like this.

I agree. It's absolutely amazing!

Yes, wasn't this an interesting one?