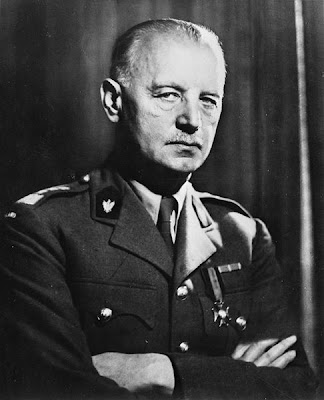 Yesterday, according to the Times, Krakow’s Royal cathedral looked a crime scene investigation as gloved and masked forensic scientists lifted the fragile skeleton of General Wladyslaw Sikorski , Poland’s wartime leader, out of his marble tomb and subjected the body to the latest tests available to modern science – tomography scans, DNA samples, a search for trace elements of poisons.

The aim of the investigation was to shed light on one of an enduring question of WWII - was General Sikorski murdered?

The investigation into Sikorski’s death was supposed to put an end to more than half a century of conspiracy theories. “The exhumation may bring a breakthrough in the investigation,” said Andrzej Drogon, of the National Remembrance Institute, which formally opened the case after a book presented fresh information suggesting that Moscow was behind the death.

In April 1943 the general, who was head of the Polish government-in-exile, had demanded an explanation for thousands of Polish officers found murdered in the Katyn forest, near Smolensk in western Russia. The Kremlin, meanwhile, was making moves towards creating a communist-sponsored Polish government for the postwar period. Sikorski had become a serious problem for Moscow. On July 4, 1943, Sikorski, his daughter Zofia and a group of officers took off from Gibraltar. Within 16 seconds they had crashed into the rocks below.

One theory was that the pilot, the only survivor, had brought down the aircraft deliberately. Sikorski was found in a lifejacket, even though he was famed for not wearing one for superstitious reasons. Researchers yesterday were trying to determine whether there was any trace of poison left in the skeleton, whether there was any sign of a bullet wound and, indeed, whether the body really was that of the general (DNA swabs have been taken from the grandchildren of the general’s sister).

Many historians believe that even the elaborate exhumation will not give a decisive verdict on the cause of death. At the very least it will pile up pressure on the British Government to declassify secret documents on the affair.

Interesting stuff but I doubt it will shed new light on what was certainly was a suspicious wartime death.

I suppose the real question mark hangs over Boris II of Bulgaria.

Recent opinion now seems to think he wasn't murdered. I always assumed he had been.

You have me there