So now we know 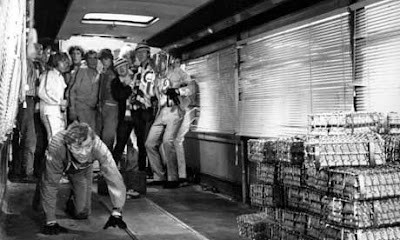 Sir Michael Caine has finally resolved one of the greatest unresolved questions of British cinema – how the (anti?) heroes of the Italian Job escape the literal cliff-hanger at the end of the film. Remember we are talking about the BRITISH original and not the American film of the same name.

The film ends with a gang of gold thieves hanging over a ravine in a bus. Every step they take towards the loot threatens to tip them into the abyss. "Hang on lads, I've got a great idea," says Charlie Croker... and then the credits roll.

Caine said that he would have saved them by "switching on the engine", burning off petrol until it righted itself. "I crawl up, switch on the engine and stay there for four hours until all the petrol runs out," he said. "The van bounces back up so we can all get out, but then the gold goes over. There are a load of Corsican Mafia at the bottom watching the whole thing with binoculars. They grab the gold, and then the sequel is us chasing it."

Sir Michael gave his solution at the 2008 Visit London Awards where he was named London's favourite Londoner. Okay so he also said this in 2003 but I didn’t know that and this blog wasn’t in existence then!

As it happens the Royal Society of Chemistry (RSC) has a competition to find the most original, and plausible ending to the film. Dr Richard Pike, chief executive of the RSC, stated that Sir Michael's explanation was just "one of those many plausible routes to securing all that gold.

Dr Pike added that almost 1,000 entries had been received for the competition, despite the stipulation that "the judges will not accept any solutions that involve the employment of a helicopter". "A number of people have put in, others have suggested jumping out of the bus and going down and getting the gold," he said. "Others have suggested superconductivity and the use of magnetism - although some people have pointed out, quite rightly, that gold is not magnetic. “

The competition winner will be revealed on 8 January 2009. I can’t wait to find out the winner but I had hoped that Sir Michael’s solution involved blowing the doors off and just that!

I like Sir Michael's solution. I saw the film but never gave much thought to this.

Hi Jams, we are home

I like to think they got away with it Kay!

Yes but can you believe him?

"we are the self-preservation society"

I say James. Sir Michael DID defend Rorke's Drift.. of course I believe him!

That film always did leave me wondering...

It will be interesting to see what people come up with!

I'll be able to sleep at night now! [I did always wonder about that.]

Cherie I am fascinated to hear what solutions they get. Should be fun!

Rope and a grapling hook.

Well, you did have an adventure. Our field trip was quite uneventful.
You are lucky this chump didn't take yo Worms Head.