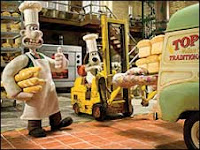 The film - originally entitled Trouble At' Mill - marks Wallace and Gromit's first appearance since their 2005 film The Curse of the Were-Rabbit. Peter Sallis will again provide the voice of Wallace.

"I love making films for the cinema but the production of Chicken Run and Curse of the Were-Rabbit were virtually back to back," said Park. "Each film took five years to complete," he continued, saying A Matter of Loaf and Death had been "so much quicker to make."

The film is described as "a classic 'who-doughnut' mystery... in the tradition of master of suspense Alfred Hitchcock".

Wallace and Gromit are wasted on kids. I can't wait!

As I saw the beginning of the post 'Wallace and Gromit are back. I thought I can't wait. At the end of the post it seems you beat me to it ;-)

LOL I wish I got your television instead of what we get here in the U.S.

I wish I could remember the film when my kids were small that was really wasted on them. They enjoyed it but there were a lot of things they didn't "get". I do recall dragging my their dad to see it and he roared with laughter.

Wallace and Gromit are very English. Although the visual humour is universal many of the references would be lost, especially on kids

hubby loves them :) hopefully, they come stateside in dvd form :)

A man of exquisite taste Betmo.

It will indeed Rob!

I'll toss in a few votes for my kids. They love it.

Oh man I love Wallace and Gromit! And you're right... totally wasted on kids.

Nick Park has certainly struck a chord with his creation!

My kids LOVED The Curse of the Were-Rabbit. I like that I enjoy it as much as they do!

It just goes to show that adults love Wallace and Gromit!

Oh fantastic! I wasn't that impressed with the Curse film so will look forward tothis.

I liked were rabbit but this will be the high point of xmas!