Burning Questions of History reconsidered – One Nut or Two? 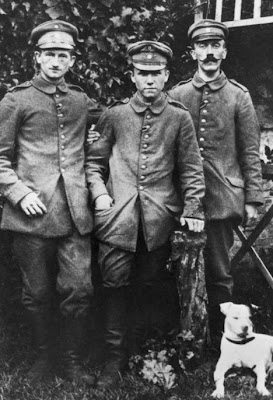 Hitler hides an assymetrical bulge in his trousers by hiding behind comrade?
Following the shock revelation of an account that seemed to confirm that Hitler had but a single knacker, historian Andrew Roberts wrote an article in the Mail asserting that he had the full complement of C.O. Jones in his Hugo Bosses.

Much as we would all love the story to be true wrote Roberts sadly it is merely the latest in a very long line of unfounded rumours about the most evil tyrant of the 20th century. The allegation that Hitler lost his testicle at the battle of the Somme has, in fact, been around for decades.... Hitler's conscientious physician Dr Theodor Morell, who knew every inch of the Fuhrer intimately and had the trust and affection of his patient, certainly made no mention of it, and neither do any contemporaneous or subsequent medical records.

So the claim that Hitler was monorchic (the medical term for having one testicle) must join the many other weird assertions that have been made about him over the 119 years since his birth in 1889. There were tales, for example, of the infant Hitler having his penis bitten off by a goat into whose mouth he was attempting to urinate. ...

And so on and so forth I won’t go further than the goat/penis incident. Perhaps it proves that a lot of things said about Hitler’s genitals, are merely a phallusy..

Oh dear that pun is terrible!

That was an excellent pun -- keep up the good work.

That's quite odd to sit here in Egypt in the sun and read about Hitler's testicules, lol !

Ah but Tupac Shakur was renamed Onepac after his shooting. His brother Sixpac had some trouble with
alcohol and ended up at the Betty Ford Clinic.

I see there are mixed views on the quality of the pun. I stand by my pun!

Like Hitler, it was rumoured that Bin Laden also had a small Pee Pee.
But these rumours asserting that the enemy lacks ‘less than average’ manly parts is a common denigration device for the Public to draw comfort from. This psychological comfort is an attempt to console the public that the enemy is not as scary or powerful, thus easy to defeat.

Ardent, Free Man, you are true connoissuers of bad puns. I salute you!

K, on the other hand it is cringeworthy!

The Latvian dictator Kārlis Ulmanis is also rumoured by some to have had a testicle deficit... somewhere between a supposed boating accident a possible affair with his perhaps traitorous Foreign Minister. Clearly we need an in-depth study of the mythology of monorchy among authoritiarian leaders...