The Sea Eagle to return to England? 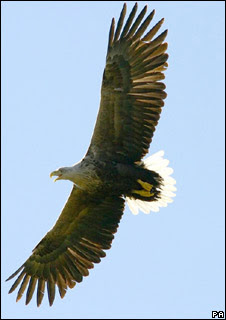 Yesterday’s Times reported that conservationists have embarked on a campaign to get landowners to support the reintroduction of sea eagles to England. Plans for a rolling programme of releases - with at least 15 young birds taken from the wild in Poland and set free in Norfolk each year - have been drawn up by Natural England, the Royal Society for the Protection of Birds and Anglian Water.

In an attempt to avert potentially damaging opposition to the scheme, conservationists said yesterday that they intended to meet landowners to address their concerns. Compensation will be offered to farmers who can show that they have lost livestock and there will be an effort to explain how little threat the eagles pose. Unusually, some conservation groups are among those opposed to the idea of bringing the birds back to East Anglia because they fear the eagles will prey on bitterns, a shy wetland species that they are anxious to establish as a successful breeding bird.

Sea eagles are thought to have disappeared from Norfolk 500 years ago. Persecution by farmers, hunters and taxidermists meant they were eradicated from all of England by the 1830s and from Scotland by 1916. They were reintroduced to Scotland in 1975 and by last year the programme had been so successful that there were 42 breeding territories.

I really hopes this goes ahead. It would be wonderful to see these magnificent birds back in England again
Posted by jams o donnell at 10:13 am

Like you, I hope it goes ahead and has great success.

I would love to see them back.

You would not likely see them in Romsford. I have seen Osprey by chance four or five times not far from NYC.

Be thankful that the UK is immune to
those who wish to introduce Roadrunners. If that happens Ted might leave the comforter and become the UK equivalent of Wiley E Coyote.

They are amazing James.

We wouldn't se them here Beakerkin, although perhaps within 100 miles and that's good enough for me