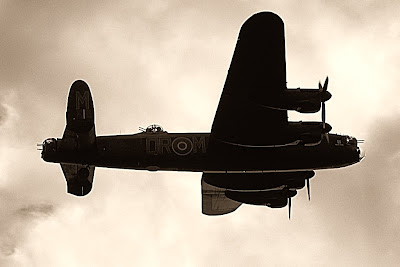 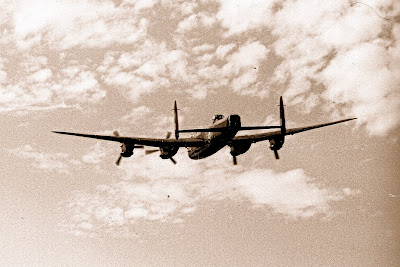 The theme for this week's Photo Hunt is metal. Once again I'm not stretching the theme to show some photos's of the UK's last fully airworthy Lancaster bomber. The photos were taken at the 2006 and 2001 or perhaps 2002 Pathfinder Sunday at RAF Wyton, an annual day when the RAF salutes veterans of Bomber Command's Pathfinder Force. As I have stated in several previous posts I often take dad to the event so that he can have a few drinks with surviving comrades.

As it happened Dad did not fly many ops in Lancasters: before he was recruited to the Pathfinders he flew Wellingtons (canvas over a metal frame) and for most of his active service he flew Mostquitos (plywood). It would be a stretch to put up photos of either of these planes now!
Posted by jams o donnell at 8:04 pm

My uncle flew those, dropping tons of Bombs on Dresden and the likes. He never talked about it.

Oh I think these finds are wonderful! Great choice and pics for the theme! And thanks for the well wishes!

Those are very cool photos. Seems we've both got retro metal this week! Have a great weekend.

These are great shots. That's great that you take your Dad to the events. Happy weekend.

Great choice of pics for this week. Hope hte weekend treats you well. :)

Wow, those are wonderful finds that were a part of history no matter how painful or victorious the events are to people Its good that yo bring your dad with you :)

Have a great weekend :)

Loved the story that went with your airplanes. When Leslie said "my dad flew B-52s" I thought..."my dad sailed the ocean blue".. that was a lot of metal too..LOL

Thanks for coming by to see mine.. this has been a fun theme!

Wow! These are truly classic shots of our history. Nice ones Jams :)

what interests me is the way you allocate time to accompany your dad so that he can meet up with his buddies. true filial son indeed

Great photos and wow re your dad having flown the kind of planes you mentioned!

Such a cool looking plane!

I'll bet your Dad loves going to these shows and reviving memories of his glory days as a pilot.
Great photos for this theme. Have a good weekend Jams.

Both great shots of those planes :)
Your dad must have really enjoyed the event being able to catch up with fellow comrades :)

"I often take dad to the event so that he can have a few drinks with surviving comrades." - that's heartwarming. Nice photos. Enjoy the weekend. =)

Nice one, Jams. We love looking at these planes and go to the local air museum every year when they let us crawl around 'em. Very cool.

I had no idea what to do with this week's theme, so I'm afraid I did stretch it a bit:

A terrific choice, Jams. No complaints with that one.

That's plenty of metal sheets- to make up a plane! I love the first shot -it's as if I can already feel that I'm up there in the air.

Have a lovely weekend Jams!

I love to attend air shows. And the fact you made the photos sepia brown makes is so authentic looking.

My metal is posted. Drop by for a visit if you can!
Happy Hunting.

I would love to see these beauties fly! What a rare treat!

Our Air Force is having an open house tomorrow showing off their latest planes.

Lovely photos It's perfect for theme. amazing that metal can fly. What a nice thing to do with your Dad.

Hi Jam! Nice photos this week! Like the sepia tone too;-) Have a great weekend!

I've been reading about the Bomber Command role in WW2 recently and how it played a vital role in Germany's defeat- not terrorising the Germans into surrendering (it didn't), but depriving them of fuel and forcing them to build fighters rather than bombers.

Your dad should be given free train and plane travel. All veterans should.

Excellent photos.
My husband said that this used to be a regular sight during summer. He used to live just 15miles from Coningsby where the Lancaster is based, along with the Spitfire and Hurricane.
Have a great weekend, Jams :)

Wonderful shots of those historical planes in flight.

I love watching air shows. Last year my hubby and I took our son to an air show. We all had a fantastic time watching the great air performances.

No stretch at all as far as I'm concerned...good one!

These are great! Perfect choice for our theme and so interesting to look at - like looking at a piece of history.

I once dreamed of flying that! Nah, remained dream...

Those are great shots for this week's theme!
Have a good weekend!

Very cool shots and great for this week!

Oh cool! I did something very similar this week, except that my plane is grounded. Great photos!

Thank you for visiting my Photo Hunt last week. I am finally getting caught up!

Excellent choice. That Lancaster flew over our house in S. Wales once - wonderful sight and sound.

A great choice for this weeks theme :-)

Wouldn't you just love the opportunity (in peace time) to fly any one of those wonderful planes?

Daisy's mom here:
Those photos sure look like they should be really old! When my father was alive, he loved getting together every year with the "Caribou Club" which was a group of men who flew the de Havilland Caribou transport plane in the war.

Ah, you're a good son Jams. Bet your Dad and his friends tell some wonderful stories.
We have a small air field a couple towns over. Once a year there is a small air show. We don't have to attend - we can just sit in our front yard and watch the planes. None like you and you Dad get to see, but fun for us anyway.

Thanks everyone! Thanks four times over anonymous!

We owe a lot to people like your dad. Great photos, jams.

WOW! You never fail to amaze me!
Excellent photos - and I also like the story behind!

Have a wonderful weekend, greetings to you dad :-)

Oh Jams I think this is wonderful and not stretching at all.

LOL....now I stretched with Harriet.

Thanks for dropping by and happy Weekend:-)

There is something very beautiful about the old planes. They don't have the same super industrial look as the ones today. Great shots:)

Cool story and very cool photos! Definitely not a stretch. I would love to see one of these planes flying in the sky. At first I thought they were old photos from a movie! Great choice for this week's theme :)

What a great choice for the metal theme. My father loves going to see the planes at air shows. That's nice that you get to go with your dad.

Nice pictures for the metal theme. Your dad must be very glad to have you taking him there.

I saw a picture of your dad a little while ago, right? He's a very handsome man!
You certainly have a different take on the theme this week Jams!

very cool photo! I would love to see an event such as this one...

thanks for dropping by my blog, by the way.

Very cool shots Jams! Thanks for dropping by mine! I'm just catching up on my blog visits :)