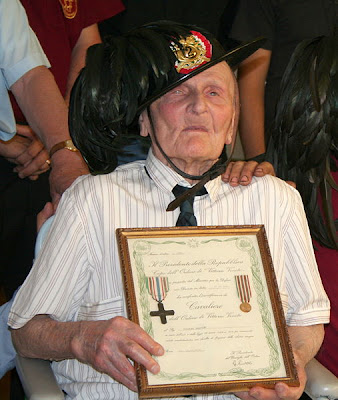 Delfino Borroni,110, who died on 26 October, was the last Italian veteran of WWI

Borroni was called up in January 1917 and saw action on the Alpine Front. He was wounded and taken prisoner by the Austro-Hungarian Army during the battle of Caporetto.

There are now just 11 known veterans of WWI still alive.

The Alpine Front was quite a hard battleground, though often forgotten. Though not a very long front, it was of course, in difficult terrain. Quite a high death rate.

It certainly was Crushed. It saw carnage as bad as anything on the Western Front

Thanks Mary. I've missed you.

It is truly amazing that there are any of them still alive. What amazing changes they have seen over such a long life.

It certainly is jmb. In a few years there will be none and the war passes into history