A belated apology from Thierry Henry 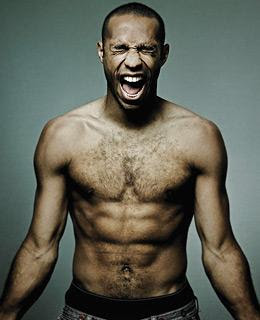 Thierry Henry at Customs control at Dublin Airport
Better late than never some may say (although perhaps better he owned up to his handball at the time) but Thierry Henry has apologised for his handball during the World Cup playoff between France and the Republic of Ireland.

According to a report in today’s Guardian he now believes a replay would be the "fairest solution" to the continuing furore over the handball which led to the goal that eliminated Ireland from World Cup qualification, and said Ireland "deserve to be in South Africa".

"Naturally I feel embarrassed at the way that we won and feel extremely sorry for the Irish who definitely deserve to be in South Africa," said Henry in a statement today. "Of course the fairest solution would be to replay the game but it is not in my control."

Henry handled the ball twice immediately before passing to team-mate William Gallas to score his side's decisive goal in the 1-1 draw on Wednesday, but referee Martin Hansson still allowed it despite vehement protests from the Ireland players.

In a statement he said: "I have said at the time and I will say again that yes I handled the ball. I am not a cheat and never have been. It was an instinctive reaction to a ball that was coming extremely fast in a crowded penalty area.

"It is impossible to be anything other than that. I have never denied that the ball was controlled with my hand. I told the Irish players, the referee and the media this after the game. Naturally I feel embarrassed at the way that we won and feel extremely sorry for the Irish who definitely deserve to be in South Africa. There is little more I can do apart from admit that the ball had contact with my hand leading up to our equalising goal and I feel very sorry for the Irish."

Fifa have already turned down an Irish request for a replay of the match. Unsurprisingly the French have rejected any appeal.

Ireland's captain, Robbie Keane, said: "On behalf of the Republic of Ireland players, I would like to thank Thierry Henry for his statement this afternoon that in his opinion a replay would be the fairest option. I would also be happy for a replay to happen in the interest of fair play so that whichever team qualifies, can do so with their heads held high. We can only hope that the French Football Federation might accept the wishes of both captains in the best interests of the game."

Fat chance Robbie! The French are not going to throw away the millions they will earn from qualifying for the finals no matter how unfair it was. As for Henry, his apology is a little hollow given that he didn’t exactly pipe up at the time.
But then football is a funny old game. Shame nobody is laughing much...
Posted by jams o donnell at 4:50 pm

Oh I don't know. The Georgians who got beaten by Ireland thanks to some very dubious refereeing in Feb might be having a little giggle about it.

He's got a gorgeous body though ...

Actually, I thought it was pretty good of France and Henry to act this way. It's not the usual French reaction.

Screw Henry. He cheated, he won, and he's proud of it. Don't give me that PC bull crap. There's no coming back from this, Thierry. Go and join your partner in disgrace Zinedine Zidane. You both had a fantastic career, yet you will be remembered because of an illegal play...

At least the English will finally stop talking about Maradona's hand of God for a while!!! I know, it has only been 23 years... :-)

As much as I cheered for Ireland to beat France, because it's a team I always cheer for, I don't think there's anything that can be done now. You see, FIFA had named France head of a group for the World Cup days before that game... They must have known something...

That's true. It just an indication of how squalid the game truly is Skuds

That he is Liz!

Forget the hand of God Gabriel?#' Never! THe Falklands situation will be settled long before that is forgotten!

And naive Americans like me still think "handball" is a different game altogether...

About the only thing I'll say in defence of Henry - the act was indefensible, the level of vitriol aimed at him equally so - is that every bugger in professional football does it.

Rank cheating, poor sportsmanship and downright thuggery happens week in week out, and FIFA/UEFA/FA couldn't care less or they'd do something about it. Henry was out of order, but it's symptomatic of the business he's in.

I wonder why I watch it sometimes.....

Well Brian, I kicked the ball first time and then it was in the net.

That's the problem Chris it is a squalid game nowadays. Frankly I think that the game at most levels justs spits in the face of the fans. I know that I won't pay a small fortune to see West Ham

Told yea Diego Armando M. will teach them all. Now we are eating the poisoned fruit.

Well at least he is no loger football's public enemy number 1.. for a few moments