Wonders of the deep 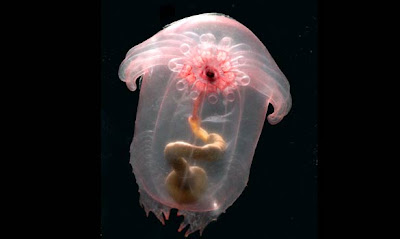 A transparent Sea Cucumber (I feel a haiku coming on)
I last reported on the International Census of Marine Life back in 2006 (I think). The census It has been a decade-long exploration of the deep and, unsurprisingly, it has revealed a startling range of exotic new species and alien ways to eke out a living in the perpetual darkness.

Over 300 scientists from 34 nations have studied the oceans using a range of tools including deep-diving submersibles, piloted robots automated drones discovering more than 17,000 new species in the process

For example an expedition to the mid-Atlantic ridge this discovered what is thought to be a new species related to the octopus, nicknamed the “Jumbo Dumbo” for its passing resemblance to the fictional flying elephant. 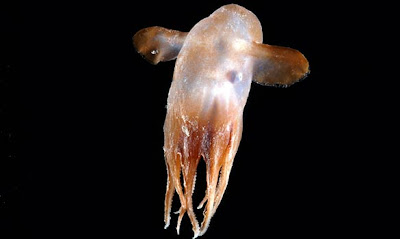 Dumbo squid
“If it came up in a trawl it would just be a lump of jelly, but photograph it from a submersible, and it’s very beautiful and graceful,” said Odd Aksel Bergstad of the University of Bergen. “We know very little about how they live. They’re predators but we don’t know what they feed on or how they reproduce. At least one of the nine kinds we found is probably a new species.

Much life in the deep relies on death in the sunlit waters above. While most food comes from the falling remains of tiny marine organisms, occasionally the biggest animals on the planet crash to the seabed. Seventeen species of “zombie bone-eating worms” — otherwise known as Osedax — survive on the rare bounty of a sunken whale.
In the deep, unidentified species are often the norm, not the exception. One cruise yielded 680 specimens of fly-like copepod, only seven of which could be identified. 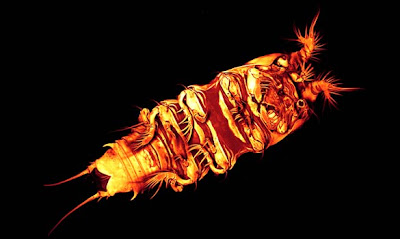 Copepod
“The abyssal fauna is so rich in species diversity and so poorly described that collecting a known species is an anomaly,” said Dr David Billett of the National Oceanography Centre, Southampton. “Describing for the first time all the different species in any coffee cup-sized sample of deep-sea sediment is a daunting challenge.”

Information from the census will be used to inform efforts to protect the diversity and abundance of deep-sea species. Fishing the depths relies on bottom-trawling that can destroy fragile habitats before their existence is even realised. The offshore oil and gas industry is drilling in ever deeper water, and plans to mine rich mineral deposits on the seafloor are in prospect.

One word to describe my feeling about the new discoveries and that's WOW!
Posted by jams o donnell at 9:35 pm

Amazing stuff. So much stranger than the creatures invented for SF films.

God yes. Well the deep is the final frontier... until we head into space properly anyway

Wow! those pictures are amazing!

Oh I do agree 'Wow!' is the perfect description. I'd still rather look at them from the comfort of my couch though :-)

The tree of life is broad, almost unbelievably branched, and ruthlessly pruned by natural selection. That's true in the depths as surely as in the part of the ocean we are more familiar with.

If you really want to stretch your imagination, look at these creatures, then imagine their evolutionary ancestors and their cousins that didn't make it. Life is staid and tidy for us, but it isn't always that way in all times and places.

It is a WOW thing, Jams. But I wouldn't want to share their space. Even with the tiny, tiny ones that nobody has seen yet. Let them have the deep water, and I'll stay on land. I hope humans don't decide to dump some of our destructive chemical waste in their kingdom.

In addition to what has been written: Why would so many of these creatures be / have become so colourful. According to our logic it makes no sense, down there in the darkness, hm?
Amazing. Indeed.

Agreed Suan. They are amazing but better seen from on a tv or computer screen!

I hope so too Claudia

It is strange but it adds to the wonder doesn't it Sean?

I know that science does or will explain virtually everything in the end. Still it is good to be able to stare in awe least until the sight goes from the awesome to the quotidian

Now we take a giant squid in a huge frying pan to a certain tuxedo cat.

Do they publish the cartoon Get Fuzzy
in the UK. It seems Bucky is ripping
off Ted's real life. Although he seems to lazy to plot evil against ferrets.

These are strange species, Jams! :o

THe certainly are LB

I;ve not heard of the strip Beakerkin. I will inform Ted and let him take a brutal vengeance!

Yep. That's big WOW stuff. It will take another thousand years to sort all these critters out, of course if we don't poison them first with our refuse.

Re that Sea Cucumber: looks suspiciously like a jellyfish in the midst of a BM ;-)