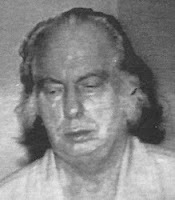 According to the Telegraph English Heritage, the government agency, which runs the blue plaque scheme to commemorate the residences of eminent people, has rejected an application by supporters of the founder of Scientology after its blue plaques panel decided that it was unconvinced about Mr Hubbard's "reputation".

From 1957 until 1959, Hubbard based himself at Fitzroy House, in London's West End, and wrote many of his works there. It was a Scientology "church" until 1968, when it was sold. The organisation then bought it back around six years ago and the four-storey building, at 37 Fitzroy Street, is now open as a museum in Mr Hubbard's memory.

According to minutes of a meeting in June last year, obtained using Freedom of Information legislation, the blue plaques panel decided that "more time was needed to make an objective assessment of Hubbard's reputation". Panel members present at the meeting included Professor Andrew Motion, the former Poet Laureate.

The panel "also noted that [Hubbard] had no settled residence in London". However, other foreign personalities who only spent short periods of their life in the capital have been awarded plaques in their honour.

Blue plaques are considered a high accolade and have been erected outside the London homes of some of the world's greatest minds. Eligibility guidelines state that nominated figures must have been dead for 20 years or have passed the centenary of their birth, and must have made an "important positive contribution to human welfare or happiness". Hubbard died in 1986.

Not much of a story I suppose but as for giving L Ron Hubbard a blue plaque I would strongly support the move when Hell freezes over. Until then the evil old bullshitter can rot, but then that’s what he’s been doing since 1986 anyway...
Posted by jams o donnell at 8:11 pm

Yes I agree with when hell freezes over...

Never for this one.

Could never understand how anyone would fall for that gibberish. Sometimes I despair for the human race...

I think they wrote that for people like Scientologists.

It is sad to see such cyncicism.

Know ye not that Elron invented the e-meter, which has been of incalculable benefit to Operating Thetans everywhere.

Aaaaaaaaaaaamen! I read his book ar the behest of a dentist friend who fell into his clutches and was astounded that anyone would fall for this crap. Shows that Barnum was right: "There's a sucker born every minute . . . and one to take him every other.

THat people fall for Hubbards bullshit should amaze me. Actually it doesn't surprise me, little that humans do surprises me anymore! Still I would not like to see this conman memorialised