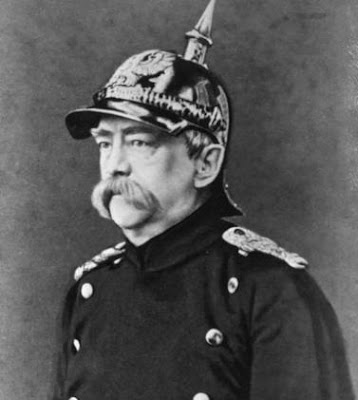 Who needs Handball Henry when you have a hunk like this?
According to today’s Telegraph more than 6,000 personal letters that were sent to Count Bismarck while in office and retirement have been made available to scholars.
I it Perhaps unsurprising that the letters indicate that many Germans saw Bismarck as a messiah figure. But some viewed him an object of desire.

A married woman from the Saarland wrote to him saying: "I am unhappy in love but know that we could be wonderful together. I am a very good cook and stuffed pig's stomach is my speciality."

One doctor, concerned about Bismarck's circulation, addressed him as "Your Highness" and advised him to do "gymnastics in your bedchamber" (a distinct possibility if he took up the Saarland hausfrau’s offer!)

The old chancellor, whose idea of relaxation was to drink several barrels of fine Rhine wine over a period of days before fasting, usually replied to every letter he received.

It must have been the sight of that huge bushy moustache that sent the womenfolk of Germany ablaze with passion.... ooh and those eyebrows too!
Posted by jams o donnell at 11:18 am

Well the way to man's heart is through his stomach!

Must have been the phallic symbol on the hat. Then again he is more worthy
of veneration than Trotsky, Kim Jong Ill, Hugo or any of the other usual suspects.

THe big spike 9on his helmet must have been a turn on!

Now I know what Leonid Brezhnev missed. And re stuffed pig's stomach: how could he remain indifferent to such a proposal?

Well some people are immune to such things!