History made in Hornchurch

Hornchurch stadium is one of my area’s unsung local amenities. Located just beyond Upminster Bridge station it is the home of Hornchurch AFC “the Mighty Urchins”), currently in the lower half of the Ryman’s Premier League and the Havering-Mayesbrook Athletic Club.

It’s never going to host International events but amazingly it has seen at least two world best times since it was opened in 1956.

Phyllis Perkins represented the UK in the 800m at the Rome Olympics. Sadly, she failed to qualify from her heat.

The following year (16 May 1957) 24-year old Diane Leather smashed Perkins’s record by over 5 seconds, recording a time of 4:30 dead. She bettered this time at a meet in London in July and remained the record holder until New Zealander Marise Chamberlain clocked a time of 4:19 in December 1962. 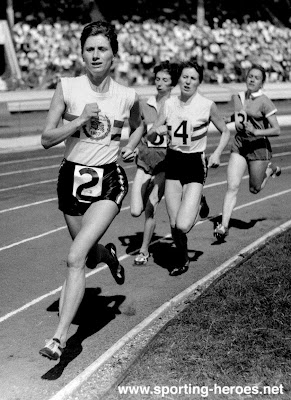 Diane Leather was one the finest British female athletes of the 1950s: she was the first woman to break the 5 minute mile mark just three weeks after Roger Bannister went below four minutes. She was silver medallist in the 800m at both the 1954 and 1958 European Championships.

Sadly neither Phyllis Perkins nor Diane Leather were technically world record holders as the IAAF did not recognise female 1500m times until 1967... not that this means that their achievements are diminished in any way
Posted by jams o donnell at 9:52 pm

When I see a photo like this I often wonder about the equipment that used.

Would be awesome to run like that. It takes a huge commitment to training. Personally i don't think a medal or recognition have anything to do with achievement. It's all about personal goal setting. Happy WW

Do you think that some stadia and pools are more conducive to records than others? The reason i say that is that there is the Olympic pool in Melbourne which has seen more swimming records broken than any others around the country.

Dude! What's in the water there? And can I get some?!

It was certainly interesting for me to read the post. Thanx for it. I like such topics and anything that is connected to them. I definitely want to read a bit more soon.

Thanks everyone. James I think some stadia lend themselves to records. Oslo was a favoured record place at one time

The world was rather slow in giving due recognition to women.

Ha, Jams, and a glimpse at the official program of an 'International' in White City on Friday, July 19th, 1957 tells me that Diane Leather won the 'mile' in 4:50,6.
Thanks for offering a reason to dive into my archive.

Well glad to have prompted you Sean!

Even in drag Snoopy!