Ach, when one sees that sort of newspaper headline in anything outside of, say the late Weekly World News, one is almost certainly going to be disappointed. I had a mental picture of a huge Kraken-like coelenterate attacking a factory ship-sized vessel and dissolving the crew...

Well not quite, the vessel was a ten ton fishing boat but the jellyfish were damned large, if not out and out behemoths!

According to the Telegraph, the Diasan Shinsho-maru, capsized `as its crew was trying to haul in a net containing dozens of huge Nomura's jellyfish. 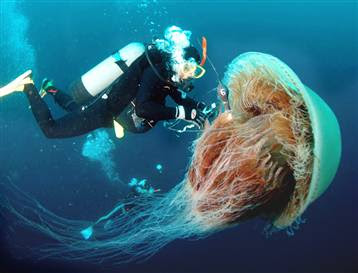 The jellyfish is one of the largest jellyfish in the world, growing up to two metres in diameter and weighing up to 200kg. Not much is known about Nomura's jellyfish, but its population can vary enormously each year. Last year had virtually no sightings of the jellyfish but this year the waters around Japan have been inundated with the creatures.

To end this sort of shaggy coelenterate story, The crew of the fishing boat was thrown into the sea when the vessel capsized, but they were rescued by another trawler, so all’s well that ends well...
Posted by jams o donnell at 8:05 am

It'd take a lot of peeing to reduce a sting from that thing!

Now that's scary! Sicily had an invasion of big jellyfish this summer.

A bit of a sea monster! Wouldn't want to see one face to face...

Mess not with the giant jellyfish!

Thanks everyone... I have a thing about monsters from the deep!

Please, don't ever go swimming in deep water, Jams. Monsters (everywhere) have a way of knowing where their friends are. They'll come and get you. It's lonely down there...

Not sure if I fancy meeting one of them.

I wouldn't either James!

That is an impressive Jellyfish!!

It is really impressive eh?

I wonder what it tastes like. Never been in Japan or seen a jellyfish dish in a Japanese restaurant.

I can;t imagine either Snoopy, with teh stings it may be a bit tangy!

I've read more jellyfish are swarming the shores of the world because the waters are warming and pollution attracts the food they like to eat.

Do you mean to tell me they weren't eaten alive!? What kind of MSM story is that?

It is huge, eh DOra?

I think that is probably the case Crow

I know Aileni, it could have doen with gore and entrails.. perhaps that's why it wasn't in the Sun!

I would never want to face that thing in the ocean, glad to know the fishermen came out OK in the whole thing!