Iranian Government in a pathetic harassment campaign against Shirin Ebadi 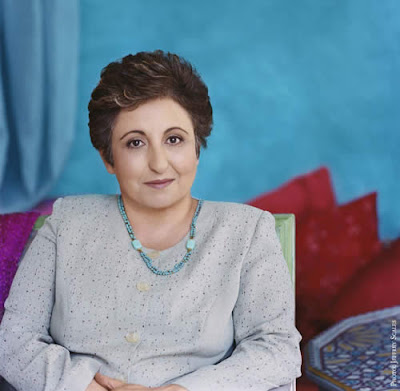 The Times (amongst many papers) reports that the Iranian authorities have confiscated the Nobel peace medal and diploma belonging to Shirin Ebadi. Shirin Ebadi is a human rights lawyer who is one of the hardline regime’s most outspoken critics. The pretext? The Government claims that she owes almost £250,000 in tax.

The seizure of the award is unprecedented in its 108-year history and has caused outrage in Oslo, where the Nobel Peace Committee is based. The Norwegian Government summoned the Iranian envoy to protest, and the committee said that it would make a formal complaint.

Dr Ebadi was awarded the prize for her advocacy of democracy and human rights. She was abroad during President Ahmadinejad’s disputed re-election in June and has spent the past five months travelling the world to draw attention to the regime’s alleged electoral fraud and suppression of the opposition. “I am effectively in exile,” she said recently.

She said that the regime had frozen her bank accounts and pension, as well as those of her husband, who is still in Tehran. She continued: “Even my Nobel and Légion d’honneur medals, my Freedom of Speech ring and other prizes, which were in my husband’s safe, have been confiscated.”

Dr Ebadi, 62, told another interviewer: “They say I owe them $410,000 in back taxes because of the Nobel. It’s a complete lie, given that the Iranian fiscal law says that prizes are excluded.” The prize money was $1.4 million.

Dr Ebadi’s lawyer in Tehran, Nasrin Sotoudeh, said that the medal was seized on the order of a judge at the Tehran Revolutionary Court.

The confiscation of Dr Ebadi’s prizes is only part of the regime’s campaign to silence her. It has closed her Centre for the Defence of Human Rights in Tehran and locked up three of her colleagues. She has been denounced in the state-controlled media and charged in absentia with conspiring against the State. Her husband was badly beaten this autumn and her apartment is said to have been seized.

She insisted that she would continue to denounce the regime’s brutality and the use of show trials and forced confessions. “Naturally the Iranian Government doesn’t want the world to know what’s happening in Iran, so it’s my duty to inform as many people as possible.”

The Iranian government’s actions are just pathetic. I’ll think of some commentary (without expletives later)
Posted by jams o donnell at 8:43 am

What you mean that the Hugo apologists haven't noticed Iran is a nasty place? Maybe if they didn't start with a Mickey Marxist idiotic worldview based largely on reflexive
hatred of the USA and Israel they would grasp these concepts.

Chavez has fallen for that "my enemy's enemy is my friend" bullshit. Sadly most governments do it, the US and the UK have cosied up to some utter scumbags in theor time

There are not enough letters in the alphabet to express my thoughts. I'll ask Tetrapilotomos to invent some more.

Let us know when he has. I'll need them too Sean!

I will. Currently, as you know, he's busy with proofreading the 1669 pages of his opus "Pre-Assyrian Philately in a Nutshell", and thus does not even find the 15 minutes which according to his own word he does need to accomplish a PW, i.e. a portable wormhole.
Afterwards, though ... :)

Understood. Far be it for us to stand in the way of such a magnum opus

Isn't this unbelievable? How petty can you get? But they are determined to harass her in every way they can.

Isn't this unbelievable? How petty can you get? But they are determined to harass her in every way they can.

It is pathetic. I daresay they would throw her in jail too if they could

i managed to read only a watered down version in my local press. thanks for this info. simply unbelievable the lengths they would go to

It really is low isn't it. Glad to be of service Bengbeng

This is the sadness in being inside a country where totalitarianism is far worse than even the way Britain is going.

International pressure is hardly likely to do anything.

I see she is not actually living there but they took it from her bank ox.

Had she been there they would have stuck her in Evin Prison, no doubt, James

You're right, Jams. She will end up in jail. She wants to return to her country to sustain the protestors with her tangible presence. Not for one moment, will Iran allow her to be free.

Sadly she wil be incarcerated and her Nobel will not help. I reckon they would even jail Simin Behbahani, the Lioness of Iran given a chance