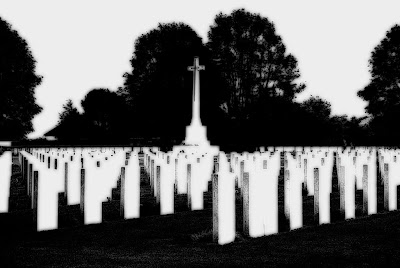 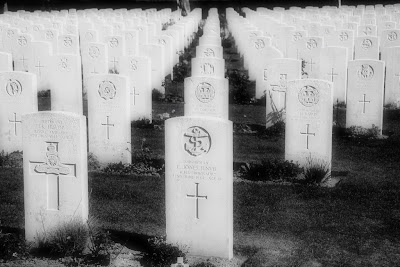 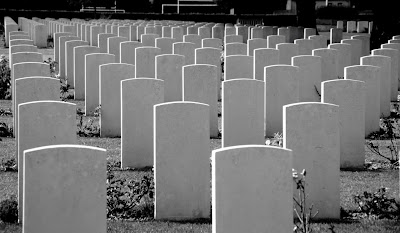 The theme for this week's Photo Hunt is veterans/military. These photos were taken in Bayeux in August. It is the the last resting place of several thousand mainly British soldiers who died during the D-Day landings and the bloody battles in the bocage in the summer of 1944.

Bayeux was the first French town to be liberated
Posted by jams o donnell at 9:26 pm

Great shots - I need to get there for a visit one of these days.

When I came here first I only saw the heading, Bayeux Cemetery and another thought popped into my head for a moment.

Rows upon rows of headstones really bring it home to one, don't they? Our young men killed in their prime.

Happy weekend to you Jams.

I was getting ready to write that rows and rows of headstones are so emotional to me when I saw that JMB said almost the same thing. It is so terribly sad. Great choice for the theme.

I hope you have a good weekend.

Beautiful photos, very poignant and a great choice for the theme.

Stark photos of a stark subject. The reality of war is that young men die and old men think it glorious.

Stark photos of a stark subject. The reality of war is that young men die and old men think it glorious.

So many war dead. I hope that on Memorial Day, people will remember that fact as well as individual war bravery and glory.

Beautiful photos. I have also a shot from a resting place for soldiers. But my picture is taken in West Virginia, and most of the graves are from the Civil War.
Happy Weekend Jams!
Best wishes
Anna

Beautiful, and the B&W makes it all the more so.

Great photos - perfect with b/w!
Great choice for the theme.
I hope you have a nice weekend

Wow.. the whole place is so orderly. Nice one Jams.

great photos and tribute to fallen heroes. i have a similar post. hope you could check it out.:p

Wow....oh wow. Just what can I say with photos like these. Moving, makes my heart take a leap. The ever so high lists of deaths during wars...Wow Jams. Great photos.

One of MY favorite Veterans is on my post this week. Come see him if you have some time.
Click Here

Thanks for stopping by.
Sue

Perfect photos for this theme.


Sniffie and the Florida Furkids

So many very young lives lost. And we don't learn.

I hope there will never be another world war. EVER!

The brave men full of patriotism in them.


Check out my husband's 20 years in the navy

great shots!! rather eerie though.

So many lives thrown away because of a mad guy with crazy ideas. Can you imagine that over seventy million people, the majority civilians, died for that ?

its good to look back of what our heroes have done to defend and liberate us.

Take a look at my HERO

So agree with jmb
"Rows upon rows of headstones really bring it home to one, don't they? Our young men killed in their prime."

Gorgeous shots Jams!
Made for b/w.
I love the depth and use of light in the second shot.

Really brings it home, doesn't it.

So, so many. Beautiful pictures to remind us of those that made the ultimate sacrifice.

'Thank you' is never enough!

Your photos really bring out the magnitude of this battle and the enormous loss of life. Moving post.

Thanks for visiting my blog, Jams!
Happy Weekend
Anna

I have never been to a big Cemetery - with all the gravestone looking the same only seen them on move.

Me to, I happy that Sweden never been in war (well they did fight before BUT long before)

I was going to say what Liz has said.

I was going to say what Liz has said.

These black and white photos make the post even sadder.

They are perfect in b/w...
Wishing you a bright weekend!