Meanwhile Angela Merkel had a beer and a sauna 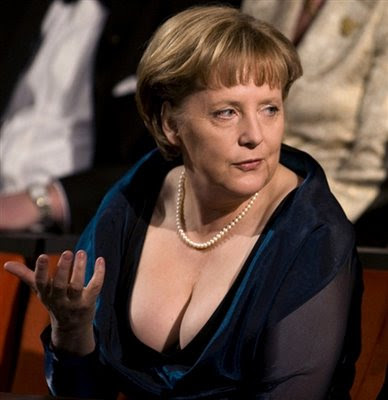 According to am English language German site called the Local, while thousands of East Germans surged past the Berlin Wall Angela Merkel visited the sauna and had a beer.

Reminiscing to foreign reporters in Berlin this week, Merkel told how she stuck to her weekly routine as a 35-year-old research scientist even as history was made around her.

"I thought something was going to happen, and had heard the announcement on television that the borders would open...But it was Thursday, and Thursday was my sauna day so that's where I went."

After her steam bath, Merkel went for a beer with a friend and only afterwards, when they left the bar, did they find themselves swept up in the huge crowds thronging Bornholmerstrasse and pouring into the West.

There she met celebrating West Berliners and shared beers with them, before heading home, telling herself "the Wall will still be open in the morning."

The next day, Merkel and her sister made a pilgrimage to the huge KaDeWe department store in the West, a temple of the western consumer society that had everything that was lacking in the East's command economy.

Fair enough! It wasn’t as if the wall would be bricked up again overnight. Still I think I might have changed my routine a little to be in at the death of the Berlin Wall but horses for courses...
Posted by jams o donnell at 12:46 pm

See, the sauna routine was worth something...

:):):) Stephanie thanks for putting a smile on my face this morning....

Ha! And to think she admitted it.

Says it all about her.

My, who knew Angela was so voluptuous?

When the hell is my country going to get a female leader?!!!

That must effect her center of gravity.

I couldn't resist that photo. It shows Merkel with more of a canyon than a cleavage!