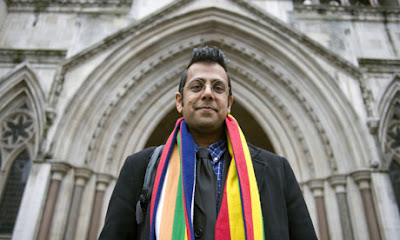 There is one area where Britain is an utter laughing stock – our idiotic libel laws. (there are others but not quite as many as mouth frothing right wingers think). It is heartening to read that science writer Simon Singh has won the right to rely on the defence of fair comment in a libel action, in a ruling at the Court of Appeal.

Singh was accused of libel by the British Chiropractic Association over an article in the Guardian in 2008 in which he questioned the claims of some chiropractors over the treatment of certain childhood conditions.

The initial court case had ruled in favour of the BCA considering that the words were fact not opinion - meaning Dr Singh could not use the fair comment defence. However, the Lord Chief Justice Lord Judge, Master of the Rolls Lord Neuberger and Lord Justice Sedley ruled High Court judge Mr Justice Eady had "erred in his approach" last May, and allowed Dr Singh's appeal.

Had the ruling stood, it would have made it difficult for any scientist or science journalist to question claims made by companies or organisations without opening themselves up to a libel action that would be hard to win. Dr Singh described the ruling as "brilliant", but added that the action had cost £200,000 "just to define the meaning of a few words".

The British Chiropractic Association said it was disappointed to lose the appeal but it was "not the end of the road". BCA president Richard Brown said: "We are considering whether

This is a good result but why the hell did it have to cost Dr Singh £200k to fend off that bunch of charlatans. Then again our libel system can allow a child fucker to sue in this country and give evidence by video link so as to avoid arrest and extradition to the USA.. The law is not just an ass it is an utter disgrace, despite getting it right for once.. .eventually.

Now hopefully the courts will also throw out that idiotic case brought by the deranged Johanna Kaschke over whether she is one cherry short of a Black Forest Gateau.
Posted by jams o donnell at 11:19 am

That is good news. Perhaps they should buy him a new scarf. The judge probably threw him out to avoid looking at that scarf.

Well if it frightened the judges!

Good news indeed! By the way to me the bold scarf looks fantastic :)

It is indeed Ana. Actually I agree on the scarf!

A good scarf for men should match the
color of your cat Ted. If it does not match Ted than leave it at the shop.

If you wondered where Tom Baker went

The orange and white on his scarf match Boris!

It's a winning argument to me.

It really was an appaling decision in the first place

That was good news and gives us hope!

Good shout. And you say that the cherry story is still ongoing? Unbelievable.

It beggars belief doesn't it Snoopy!