I can’t say I am a fan of George Bernard Shaw’s Pygmalion but I can say, thought, is that I intensely dislike the musical My Fair Lady (Just not a big fan of musicals at all, one or two excepted). What I certainly can’t say is that I had no idea that there was a real tale behind the story of the Belgian-Cockney flower girl who was groomed so that she could pass muster in high society.

The true story of Sabrina Sidney, the English girl behind the myth of creating the perfect bride, is to be told for the first time in a book at the centre of a publishers' bidding war. Author Wendy Moore, is negotiating a British publishing deal for How to Create the Perfect Wife which details how Sabrina was taken out of poverty in 1769 and trained up to become the ideal partner for a gentleman. 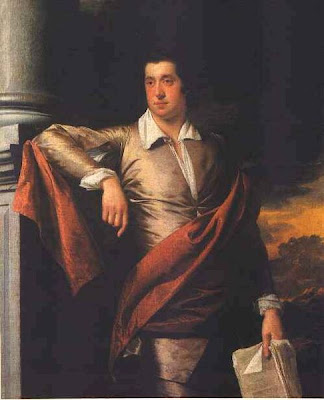 The Professor Higgins character in real life was philanthropist and poet Thomas Day (see above). Born in 1748, Day was a man of independent means and modern ideas. He was heavily influenced by Jean-Jacques Rousseau and in particular by his book Emile (1761-62) which contained revolutionary ideas about the power of education. He was also a supporter of the anti-slavery movement and advocated American independence.

Having been rejected as a suitor by a friend's sister at the age of 21, Day decided to make a perfect woman for himself. He visited foundling hospitals and adopted two young girls, one brunette and one blonde, he thought suitable for training. He named the 11-year-old Sabrina, and the second, who was 12, Lucretia.Taking them to France, the trio lived together until Sidney dropped Lucretia, his spare, for being either "invincibly stupid, or impossibly stubborn". She was apprenticed to a London milliner and later married a linen-draper.

"He kept Sabrina on though, and taught her how to read and all about science," said Moore. "At 17 she was described as being a very beautiful, very refined lady – not that this was what Day wanted." Day's preference was for simple, obedient girls. "He liked plump, white arms, and women who dressed very plainly and covered up their ankles. He wanted her to be hardy and completely subservient," said Moore.

Giving up on the project in 1771, Sabrina was sent off to boarding school. When she left school Day gave her an allowance.. She made friends everywhere and at 26 she married Thomas Bicknell: Day gave her a dowry of £500 and a wry blessing: "I do not refute my consent to your marrying Mr Bicknell; but remember you have not asked my advice." Within a decade she was left a widow with two small sons and then became housekeeper to the family of Fanny Burney's brother Charles. Here she stayed, loved and respected, until her old age.

Day did finally marry a "paragon", Esther Milnes, an heiress from Chesterfield. They settled on a small estate in Essex and Esther was never allowed to contact her family.

Lucky for Sabrina the cad didn't marry her...

I'm glad I never met that idiot man! A classic example of intelligent thought allied to incredible stupidity (and yes, they can go together!) Very interesting story for all that.

I never knew that either, fascinating. He sounds a very unpleasant man.

The first wrong thing that happened is a home for orphans giving or maybe selling two preteen girls to an unmarried man to begin with. Even if they took the time to check him out and look into his background, resources, associations, etc., the request for two young girls should have set off all kinds of red flags.

I was looking for some information about Nick Clegg, but glad I saw this anyway.

He doesn't sound too philanthropic to me.

Pagan. Life was cheap and the welfare of a couple of kids would not have been of concern to anyone. No connection with Nick Clegg though!

I, personally, hate musicals of all kind. Dunno why - some childhood trauma, I guess.

But the post reminded me of something else, not totally related:

Take some anti-barfing stuff before you read this. And don't even dream about showing it to not-the-wife, otherwise...

I would much rather be a pet cat than a surrendered wife. The cat gets plenty of loving care while he/she is still the boss!!!

It would be worth a certain operation too!