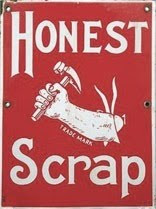 You are supposed to nominate seven other bloggers for it, who can then do with it what they will. The other portion of your assignment is to blog ten little known and interesting facts about yourself.

As for nominating seven people I will offer it up to both readers. I will leave it to them to decide who does the meme three times and who does it one more time than he or she...

1. I had two pet rats as a student: Rancid and Cuddles

2. I have less grey hear than I did this time last year.. Sadly this is not due to some miraculous reversal of pigmentation but the fact that it is falling out faster than it is going grey. (sighs)

3. I have five tattoos: two on my left arm (a dolphin and a Celtic cross) and three on my right arm (two tribal symbols and a half band which consist of a pattern of stylised tree fern leaves

4. I don’t have any piercings

5. My camera equipment is several times more valuable than my car... That’s what comes of driving a 20 year old car.

6. At one point in 1984 I probably knew more about than the noradrenergic innervation of the mucosa and submucosa of the rat colon

7. I am a member of the Cloud Appreciation Society

8. The not-wife could never understand why, when taking a leak beside my favourite musician, Robyn Hitchcock I never sneaked a peek at his membrum virilis. She really doesn’t understand urinal etiquette

9. I once wrote the lyrics to a song about spanking without resorting to the most obvious rhyme

Email ThisBlogThis!Share to TwitterShare to FacebookShare to Pinterest
Labels: memes

I'm not that interesting Susan!

An obvious rhym to go with spanking? Um... Thanking? :D

Good, Jams. How do you pronounce meme? And does it mean moimoi?

It's Meem but moi moi sounbds appro[riate for thi one Claudia!

"The not-wife could never understand why, when taking a leak beside my favourite musician, Robyn Hitchcock I never sneaked a peek at his membrum virilis. She really doesn’t understand urinal etiquette"

This is so funny! I always forget about the male urinal etiquette thing and having all girls for children, doesn't help much! I just attended a conference on autism and the speaker addressed this issue in a very comical way and how it relates to autistic boys and men who may not understand this "hidden curriculum" of the "john" - do you call it that in the UK as well?

And regarding rats. I typically don't like rodents for pets but of course, my daughters had a succession of gerbils and mice and a guinea pig, etc. And then - there was Rebel who was a rat and I adored him! He was so sweet and gentle. I was truly sad when he passed on.

We normally call it the loo, the bog but not often the john. I bet Rebel was a sweetie Sphinx!