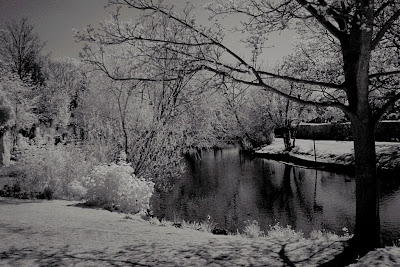 I was tagged for this meme by Knatolee last month. Better late than never.


Here's what you do:

The first folder is a mish mash of photos I've either posted before or planned to do so but never got around to it. I don't think this one has made it to the Poor Mouth before but it was take at Langtons in Hornchurch, a small 18th century house that is now used as the Borough of Havering's registry office and for functions, mainly wedding breakfasts. It has is a pleasant but simple garden.

The photo was taken with my older digital SLR, my Nikon D50 whose sensor could take infra red photos with the light blocking filter. Although it looks like snow on the ground green is shown as white in infra red photos.

I'll leave this open to anyone who wants to try it
Posted by jams o donnell at 10:21 pm

Email ThisBlogThis!Share to TwitterShare to FacebookShare to Pinterest
Labels: memes

hey, there was no pressure to do this but I'm glad you did, because I love this photo! I thought it was an icy winter scene at first. Beautiful!

It's a very peaceful scene.

Since I'm transferring from one computer to another right now, and no photos have gone on the new hard drive, I couldn't even begin to guess what constitutes the first folder.

Absolutely beautiful on the big screen.

Too much money, Jams. We'll make your pips squeak. :)

Haha Calum.. I will have to become a Non Dom!

That is very cool!