Deepak Chopra owns up to earthquake 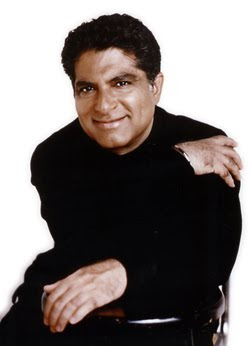 While the U.S. Geological Survey blamed day-to-day seismological changes for the 7.2 Magnitude earthquake along the U.S.-Mexico border on 4 April, Deepak Chopra, a charlatan who peddles bullshit, claimed to have been responsible.

"Had a powerful meditation just now -- caused an earthquake in Southern California," Chopra wrote on Twitter "Was meditating on Shiva mantra & earth began to shake," he tweeted. "Sorry about that."

Chopra has made millions from fleecing gullible idiots... sorry, I mean from popularising Transcendental meditation (TM), and from the allied books, DVDs and Chopra Center for Wellbeing in Carlsbad, Calif.

An hour after Chopra's Twitter confession, he vowed to one Twitter user, @WhiteMoon7, "Won't do it again -- promise."

Ah well, I suppose someone who is laughing all the way to the bank from being a charlatan can afford the odd weak joke...
Posted by jams o donnell at 2:15 pm

You're always so skeptical, Jams. I would be careful if I were you. Your blog is famous and read all over the world. Don't come and complain if Mr.Chopra, in one of his meditations, shakes your garden, and your terrified cats hide in the cupboards never wanting to come out.

Do NOT be so sceptical!

Take this advice from one whose blog is neither famous nor infamous and which is read all over ..... eh ... which is read occasionally.

I think he has ideas above his station LOL

Hmm I don;t want Chopra to start a quake here. THere's only one time I want the earth to move!

Deepak, the Liberace of transcendental meditation.

I confess to a sneaking respect for such people as they separate idiots from their cash. It's hard to feel sorry for the idiots when I hear them telling me with such conviction that everything they believe in is true. But how can he sleep at night... because he'd have to stop laughing for a while to be able to nod off, and that must be difficult.

Jams, the earth will move WHEN I beat Andrew at golf! I'll probably have to break his arms and legs but ....

I feel no sympathy for his marks either Andrew!

Start practising on your swing Calum... your baseball swing that is!

I remember reading some while ago that Eisenhower was shocked to learn that half the population of the US had IQ's below normal. Considering the popularity of this idiot the percentage might be higher now.

They may well be Susan. THe UK is little different

Maybe it's his flatulence?

I shuder to think how many beans he eats!