I know that political posts are getting rarer and rarer on this blog but I could not help but register my support for Barrack Obama in Tuesday's election.

Although either a McCain or an Obama win will represent a victory for the sinister minority (both are fellow lefties - in the sense of their being ciotogs and cack-handers rather than any political orientation) the voters of America have a golden opportunity to send a West Ham fan to the Oval Office. 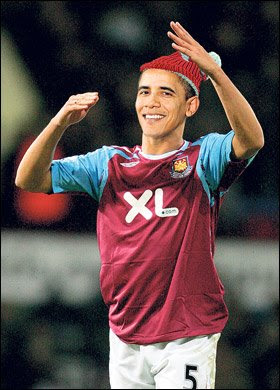 As posted earlier this year Obama has supported West Ham fan ever since his sister married an Englishman whose family are ardent Hammers fans several years ago. (okay the above picture is a bit out of date given that XL have gone the way of the dodo) 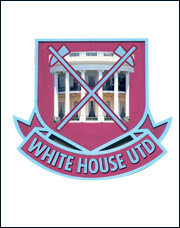 What better reason do you need to vote for Obama? McCain on the other hand pretends to be a Tranmere fan but he's fooling nobody...
Posted by jams o donnell at 8:45 pm

jams, at this point, the majority of americans are running full tilt away from anything and everything right wing. obama could be a stuffed animal and people would vote for him. although, i must say, that may be way too close to what we have had in the oval office for the past 8 years. i think perhaps that the 'silent majority' of middle classers who were so self important and busy to take notice before have had their asses handed to them financially by the cheney administration and after that rather large slap to the face (and the almost demise of most of the world's finances) are ready to react. the nice thing is- although obama was not my first choice- he is an intelligent human being. i may not agree with all of his policies and decisions, but at least i can be sure that he gives intellectual thought to them. unlike the divine intervention that has been going on for the last 8 years.

whew! guess that was wordy :)

I think Betmo put it as well as anybody I've heard yet. Anything would be an improvement over the last 8 years, and while I respect Senator McCain's service to the country during the last great military debacle, I do not feel -- as he seems to -- that years in a POW camp make one uniquely qualified to run the country.

I'd also have to agree that the "silent majority" has finally been poked hard enough to wake up and do something for once. And that's a trend I hope will continue.

Thanks for adding light moment to a subject that's been anything but!

Let us hope that sanity prevails in the USA today and that tomorrow we will be saying president Obama!!! :)

Heading out to vote for Obama right now! :D

We will know in a few hours Sue.

Naturally this is a very important factor to be considered in one's choice. Well as well as a few other minor points. Go Obama go and he did!

He certainly did jmb!