The baby and the disappearing Koran verses. 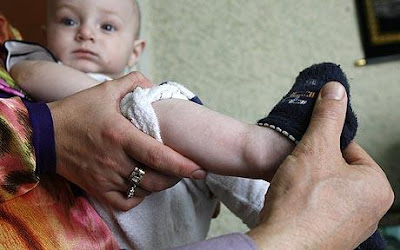 It’s been another good patch for odd appearances. First we have Tommy Cooper on a pie, then there was Jesus in Ikea (I passed on that one). Now we have Koran verses appearing periodically on a baby’s body.

According to the Telegraph Thousands of pilgrims queued up this week to get a glimpse of 9-month-old baby Ali Yakubov. Pinkish in colour and several centimetres high, the Koranic verse "Be grateful to Allah" was printed on the infant's right leg in clearly legible Arabic script this week, religious leaders said. Visiting foreign journalists later saw a single letter after the rest had vanished.

"The fact that this miracle happened here is a signal to us to take the lead and help our brothers and sisters find peace," said Sagid Murtazaliyev, head of the Kizlyar region about 100 miles north of Makhachkala, the sprawling Dagestani capital on the Caspian Sea.

"We must not forget there is a war going on here," he told Muslim leaders who had invited the press to witness what they claim is a sign from God.
Green satin flags mark the way to the baby's modest family home in Kizlyar. Armed police patrol the house while imams change photos of Yakubov's arms and legs covered in Arabic script from previous episodes to both jubilation and wails from the bustling crowd.

Sayid Amirov, Makhachkala's influential mayor who has survived around a dozen attacks on his life since the mid-1990s, interpreted the recent buzz around the baby as a warning."What happened here is indeed a miracle, but this should also be a message to not take religion too far," he told reporters.

Yakubov's 26-year-old mother Madina said she had no doubt the verses - which first appeared two weeks after birth - were connected to extremism. "Allah is great and he sent me my miracle child to keep our people safe,"

Hmm pale pink words that disappear after a few days.. I wonder if indelible ink is available. On the other hand if it did help a little towards peace in another area of conflict...
Posted by jams o donnell at 10:03 pm

I'm on my way the kitchen now to see if I can bake a cake that looks like the Virgin Mary. If it doesn't work at least we'll have a nice dessert.

Signs and miracles these days - dovetails nicely with today's post.

A wonder, a wonder!

Well it is almost certainly a hoax but what the hey, I love simulacra and similar events James

It is indeed Sean!

They should have tattooed the traces of the text immediately. This way the kid would have a permanent proof on his leg.