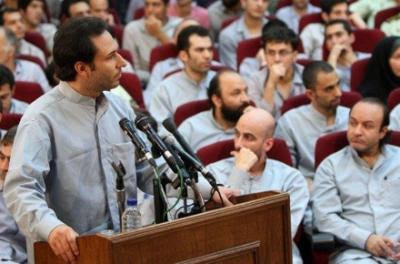 According to the Guardian the first death sentence has been passed against a defendant accused of involvement in the mass protests in Iran against President Mahmoud Ahmadinejad's stolen election. A revolutionary court in Tehran handed the penalty to Mohammad Reza Ali-Zamani, 37, after convicting him of muhabereh – taking up arms against Iran's Islamic system.

Ali-Zamani had confessed to working for an exile group, the Iran Monarchy Committee, which Iranian officials describe as a terrorist organisation. Prosecutors alleged that he plotted political assassinations with US military officials in Iraq before returning to Iran "aiming at causing disruption during and after the election".

Ali-Zamani admitted guilt during a series of show trials that began in August in. Many senior pro-reformist politicians confessed to fomenting the unrest that followed Ahmadinejad's victory. Needless to say these trials have been rightly condemned. It is pretty certain that the defendants were tortured to force them to confess.

Ali-Zamani is not well known. His indictment said he had joined the Iran Monarchy Committee after hearing about it on a television satellite channel. His activities are said to have included distributing anti-regime CDs and propaganda, as well as copies of the Satanic Verses (!!!!!!).

Ali-Zamani was accused of meeting an American called Frank in the Iraqi city of Irbil and passing information about conditions inside Iran in exchange for money. He was also alleged to have received instructions on how to build a chemical weapon from a fellow member of the IMC. Another part of the indictment alleges that he met two US military officers named "Mike and Robert" and gave them information on Iranian officials who had allegedly been targeted for assassination.

Prosecutors claimed that Ali-Zamani – who they say had a criminal record for forging revolutionary guard and judicial stamps – took part in an operation, called Salman, in which he gave the IMC information on members of the hardline Basij volunteer militia. They said he had conducted "vast communication activities" inside Iran before being arrested by intelligence officers.

The allegations were dismissed by the IMC, which is run by Iranians living in Europe and the US. A committee spokeswoman, Dordaneh Fouladvand, confirmed that Ali-Zamani had worked with the organisation but insisted he had played no role in the post-election protests. His activities had been limited to working for its radio station, Radio Tondar, she said.

This is clearly an exemplary sentence from what was most certainly a show trial. Is this going to deter protestors? I doubt it somehow. The Iranian government has just created a martyr in the making.
Posted by jams o donnell at 8:32 am

I attended one of the Toronto demonstrations against the Iranian election result. There was a clash between the Reformists and the Monarchists. It didn't last very long. The Toronto Police arrived on horses, and the Monarchists departed. They didn't look like terrorists to me. Simply people convinced that the Crown Prince would be better for Iran than what's going on presently. They might be right.Possibly some might be plotting to reverse the government. It's hard to know. The CIA has a long dubious history of putting its nose in Iran's affairs. This poor man, if involved, will pay the price.

My two-cents worth, Jams.

Ali-Zamani will just be the next guy to pay the high price of daring to open his mouth or express his thoughts in Iran.

I wish I knew how to free Iran from this monster. Waiting for the Republicans to be back in US and then find evidence of oil, I mean 'weapons of mass destruction' in Iran is definitely not an option...

That's particularly nasty in its definition.

I somehow doubt he is what he confessed to. I know the CIA has a lousy track record, especially in Iran. but I don;t think they were behind the protests.

I know what you mean Gabriel. To be honest a military intervention would be utter madness

It is James, most definitely

Of course, Jams. CIA is never behind protestors. They're behind plots to assassinate. Yes! I'm sure the poor man was forced to confess. Others will follow. It's tragic. The Canadian Iranians I met are such decent, worthy people, very worried about their country, and what's happening to their family members in Iran. Just the fact that they are here, in Canada, is detrimental to their people in Iran.

In this case I get the feeling that the protest was an internal thing. I don;t doubt that the CIA will try to muddy the waters. I just think that it probably wrong footed them too.

I do feel for the expatriates. It has been hard for them too.

As I mentioned several times: I happen to know two authors who were tortured in prison under the Shah; then Khomeini took over, and they were tortured in the prisons of the Mullahs.
So, guess whose descendants want the Shah back?
May the Iranians find an alternative for the better*.
Within my lifetime would be soon.

*Just to make sure: I do link to an Iranian blogger, although he is communist.
In this sense: May all bad things not be three.

Ach I can imagine what your friends think: Shah/Mullahs, shit/shite. I hope there is an alternative to the royalist and religious bastards