The theme for this week's Photo Hunt is bags. Not only are bags things that you carry other things around in, it also stands for the British Angora Goat Society.

Back n August we took delivery of a new pet which we were assured was a British Miniature Indoor Angora. 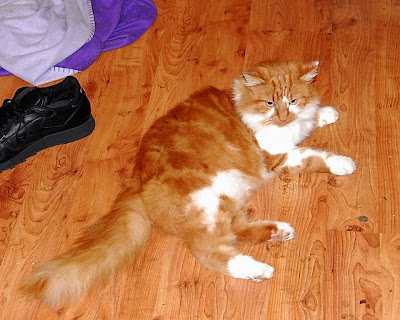 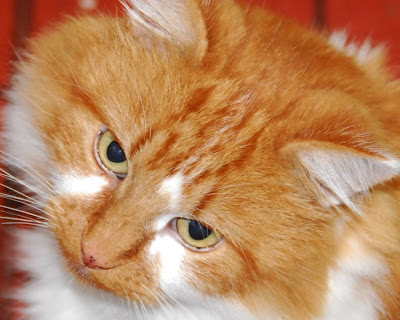 Imagine our shock and disappointment when the society wrote back to inform us that there was no such thing as a Miniature Indoor Angora. What we had taken in was in fact a cat. We were this told not to bother the society until we obtained a real angora. Furthermore we were advised to avoid sellers of Norwegian Blue parrots or of magic beans 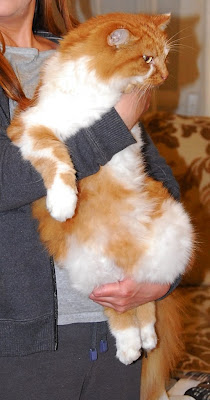 Ah well so Boris is really a cat. He's still a handsome fellow!
Posted by jams o donnell at 9:02 pm

Oh, he certainly doesn't need to belong to BAGS, he's got style on his own and he is a truly handsome cat!
Happy weekend!

Bebe must charge too much for photos

Ha too funny. Boris is definitely a handsome fellow. Hope you have a great weekend!

Oh that is too funny!!

Thanks I just felt in a silly mood this weekend!

Ha ha, I love this! Boris is soooo handsome. And that fact that there really is a Goat Society cracks me up!

We both worked cats into the theme this week! Hope you and yours have a great weekend.

Oh my goodness, this theme was perfect for your tweaking. That is a beauty. I want a cat too someday. I will get someone like Boris.

Happy halloween weekend. BTW, boris is the color of the season too.

From bags to cat - very good.

LOL!
Wonderful twist on the theme.
He's is so handsome.

Teeheeheehee -- VERY creative, Jams. Thanks for the giggles! :D

LOL. Feeling taken? Well never mind he is truly a handsome fellow and I'll bet you would not exchange him for anything.

Aww... I could always cuddle one this size in bed. Get some belly scratching on my behalf to Boris Jams. :)

He is a beauty. I just hope the breeder didn't charge you extra for spurious upperclass documents.

what a gorgeous beauty. happy halloween.:)

I want those magic beans, haha!

And Boris is gorgeous!

Cute cat and you have a good choice for the theme. Happy hunting!

I am not a cat lover, but your cat has melted my heart.

Having said that I am not a cat lover, I belong to a Cat cafe, I mind strays.

THanks everyone. Boris is a darling.. Luckily we didn't pay a penny for him Susan!

He is indeed a handsome fella. You take such good care of him too :)

Hahaha! Boris is a beauty...er...he sure is handsome!

Stuck-up bunch. Looks like you have nice cat anyway.

Great shot of the fluffy cat. Have a great weekend. CY
www.tangcyee.com

Aw, lol. I understand the confusion though. Haha. :D Very interesting post! And what a majestic cat!

That seems rude and too bad bbut glad you enjoy the Cat:)

Very interesting, Jams, the way you brought in BAGS. Boris is quite fluffy and looks rather cuddly as well.

what a snotty society! better start your own British Angora Non-Goat Society- now that's a lot of BANGS hehe have a great weekend! thanks for visiting my blog earlier =]

He is definitely a beauty. And a fun take on this week's theme. He could never be a goat!

Nothing miniature about your cat, but maybe something angora.

Maybe he would be miniature for a goat, but Boris is definitely NOT a miniature kitty! :-)

I suspect you and Boris are secretly quite happy that he's not an angora goat ...but I love your take on the bag-theme :)

Very clever! The magic beans would be the give away for me. Boris is very handsome :)

boris sure is handsome and i hereby invit you to join Pet Pride
a great place to be for all pets and their owners!

Awww she's really a beauty! She'll be happy to be in the BAGS..

Please check out what my daughter think and more…

I love that second photo :-)

He is deliciously fluffy! And I think they should give him an honourary membership in BAGS.

Oh he is Knatolee.. he is also a spoilt little brat at times too!

What a sweet beautiful goat..er...cat. He looks so much like an Angora goat that I'm thinking BAGS might have been lying to you.
After all, I have an orange and white cat and he is nothing like this cute little fella.

You could still use that gorgeous fur for something. Boris is lovely, but I'm quite sure his fur is in lovely patches all over your home. In a year's time you'll have enough for a sweater! With Angora texture!

Aww I bet you ginger gent is a handsome fellow Oldwhitelady!

Now that is true Stephanie. If we couls spin it then we could make loads of jumpers!