A memorial for a U-boat in Ireland 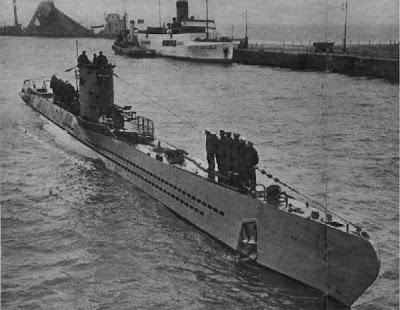 Back in 2006 when the Poor Mouth was a baby and its poverty was of Corkadoragha levels, I posted and item about the U-35, its rescue of sailors from a ship it had sunk and its appearance in Ventry in County Kerry, Ireland. I reposted the item in April when I was still in my cast and prevented from climbing the walls by the cast itself...

In Saturday’s Irish Examiner columnist Ryle Dwyer (whose original article from 1999 formed the basis of my 2006 post) wrote an article announcing that that a memorial was to be unveiled in Ventry to commemorate the U-boat’s arrival 70 years ago.

The U35 arrived in Ventry on 4 October 1939 to drop off 28 Greek seamen. Two days earlier, off the southwest coast of England, the crew of the Greek vessel Diamantis had panicked and abandoned ship when they saw the U-boat. Launching into rough seas one of the lifeboats overturned, throwing the men into the sea, but the crew of the submarine rescued them.

The other crew members were then invited on board before the U35 sank their ship The Greeks were offered beds and told to make themselves comfortable. They were given cigarettes, tea and other refreshments. They later expressed appreciation for the way they were treated. Obviously they could not be landed in England so they were taken to Eire which was neutral during WWII.

"When the Greek sailors said goodbye to me on the conning tower they went on their knees and kissed my wedding ring as if I was a bishop," the U-boat captain, Werner Lott, recalled. "I did not want this but they said we owe our lives to you. You have treated us very nicely."


When the U35 returned to Germany in October 1939, the crew were celebrated, and Werner Lott was decorated with the Iron Cross. On its next mission, however, the U35 was sunk in the North Sea on November 29, 1939.

Damaged by depth charges, Lott brought the U-boat vessel to the surface and ordered the crew to abandon ship. The commander of the pursuing British flotilla, Lord Louis Mountbatten, ordered that the German submariners should be picked up. It was only afterwards that he learned they were the crew of the U35.

Some days later Lott got a chance to express his appreciation to Mountbatten. "I thanked him for the extraordinary efforts his destroyer made to pick us up," Lott recalled. "That is how life is," Mountbatten replied. "You were extraordinary picking up the Greeks." "I could not help thinking," Lott later wrote, "why are we fighting each other?"

According to a website dedicated to Werner Lott and his vessel, the crew were placed in the Tower of London before dispersal to other POW camps in England and, ultimately, in Canada. Lott and his second in command were treated to dinner at the Savoy by Lord Mountbatten.
Despite its humanitarian nature the incident caused the Irish Government some embarrassment. On October 16, 1939 the landing was featured on the cover of Life, a popular photographic magazine with a huge international circulation. The story lent credence to the wild tales about U-boats bases in Ireland. The stories were rubbish (imagine what Britain would have done if there was truth in the story) but that did not stop them from being believed by many people.
To illustrate this point, a Daily Mail correspondent reported that he heard stories in the remote bogs of Kerry about local fraternisation with U-boat crews that "would make any Briton’s hair stand on end". He also stated that he was shown a pub in Dingle where a U-boat captain proposed a toast to the downfall of John Bull. In another pub a man told him that a U-boat called regularly at a jetty on one of the islands to purchase fresh eggs and vegetables. "Come on, Maggie," the submarine commander used to shout, "hurry up with those cabbages."

The journalist was taken in by people who were taking his beer and telling him what he wanted to hear, that or they were simply taking the rise!

Ironically the U-boat’s arrival was predated by the arrival of a damaged seaplane which set down in Ventry harbour on September 14, 1939 with 12 men on board. The pilot, Lt Edward J Brooks, and a mechanic, went ashore with a broken fuel pipe, and a passing motorist gave them a lift to Dingle where the mechanic repaired the pipe in a garage!

The ceremony to unveil the memorial will be attended by German ambassador to Ireland, Dr Busso von Alvensleben, and the mayor of the Greek Oinousses Islands, It is a small tale but an example of humanity in a war that saw so much brutality and took millions of lives, It is very much the sort of story that should never been forgotten.
Posted by jams o donnell at 11:42 am

Email ThisBlogThis!Share to TwitterShare to FacebookShare to Pinterest
Labels: U35, Werner Lott, WWII

I wouldn;t rank it along, say, the resuce of Jews from the Reich, but it was the sort of act that is seen rarely in war.

Very strange indeed...but 1939 was very early in the war.

That's true. Not much chivalry after that

Thank you. I hadn't thought of this story in years. My Granddaddy, a proud Irish American married to my Grandmother, a proud German American, told me this story when I was a little girl.

It SO needs to be remembered.