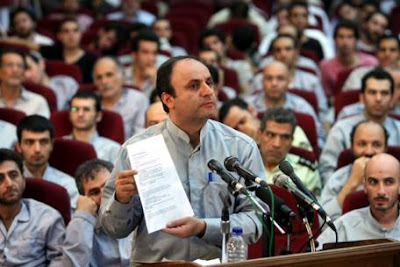 "I confess that my acts were sanctioned by British Foreign Minister, Grigory Zinoviev"
According to the Times Hossein Rassam, a senior employee of the British Embassy in Tehran, has been given a four-year prison sentence after being found guilty of fomenting violence at the behest of the British Government. Rassam, the embassy’s political counsellor, was sentenced in a closed courtroom this week, although the outcome is yet to be publicly announced.

Mr Rassam was arrested on June 27 and accused of “acting against national security (a catch-all term that can be manipulated to fit any alleged act).According to reports on the state organ Fars in July, Rassam’s confessions “cast light on many hidden angles of the interference of Britain in Iran’s internal affairs in recent years”. Apparently he had confessed to controlling a a £300,000 budget that had been allocated to establishing contacts with political groups, including that of Mir Hossein Mousavi. And so on and so forth.

Needless to say Rassam is more likely the victim of Iran’s paranoid “Uncle Napoleonism” (basically if anything goes wrong, blame Britain – an approach that has a firm basis in the past, sadly) than anything approaching the truth. Here’s hoping that Khamenei and Ahmadinejad are on borrowed time
Posted by jams o donnell at 8:16 am

We can hope that, Jams but I fear they are being propped up there by interested parties.

In the next presidential election, the bulk of voters are going to be under 25 yrs old, with no experience of The Shah, the War with Iraq or the 79 Revolution.

Indeed James and nt necessarily all clerics. It would seem that a lot oppose the leadership

That will make things interesting Ren

Strange that my last comment was anonymous.. ah well!

Dude!! And I thought everyone just always blamed the US!!

I gotta watch more of the BBC...

Ah Britain is still the default bogeyman for Iranians Stephanie