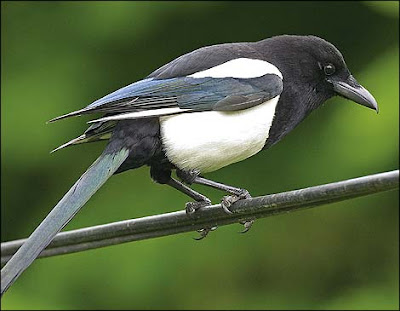 The Telegraph has a curious report on a study by a Dr Bekoff from the University of Colorado who claims that magpies feel grief and even hold funeral-type gatherings for their fellow birds.

Dr Bekoff studied four magpies alongside a magpie corpse and recorded their behaviour.

After publishing an account of the funeral he received emails from people who had seen the same ritual in magpies, ravens and crows.

"We can't know what they were actually thinking or feeling, but reading their action there's no reason not to believe these birds were saying a magpie farewell to their friend," he wrote in the journal Emotion, Space and Society.

Those who see emotions in animals have been accused of anthropomorphism – the attribution of human characteristics to animals. However, Dr Bekoff said emotions evolved in humans and animals because they improve the chances of survival. "It's bad biology to argue against the existence of animal emotions," he said.

Who knows what the magpies were thinking or doing. Although it is dangerous to apply human emotions directly to animals, the elements of behaviour that have evolved into emotions in our species are present in other species. So perhaps they were conducting a rudimentary funeral rite. However it could have been that the dead magpie was an utter git and the other magpies were making sure he was really dead!
Posted by jams o donnell at 8:11 am

That may be so but my memory of them is a whole lot of them swooping on us kids at school and pecking at our heads.

On the other hand, bringing that grass could be a culinary custom. Letting the cadaver marinate for a while with that special grass. Then they will be back for lunch.

Nah, I am just in a bad mood today.

Ever read "Where the Red Fern Grows"? Animals DO have emotions!

Okay, that's just a novel, but a friend of mine who's kept parakeets for years has observed all sort of emotional behavior in them. So why not magpies?

Great post! Personally, I think animals may have feelings and are likely way more complex than we "oh-so-smart" humans believe. Anthropomorphism? Perhaps. Or maybe some humans are more observant than others and are on to something.

The video was running backwards!

First they gave him a shitload of grass, then he was - like -dead!

The grass thing is interesting. It harkens back to the early Egyptians and their funerary rites. Gotta have stuff and food for the journey to the afterlife...

I love these guys and enjoyed this post. I guess it's some kind of anthropochauvinism (Ha!) that would preclude the possibility of emotions in animals.

Ah And now their good side James

Ha Snoopy. I'm sure it made it very tasty to othher Magpies!

I think some animals do have rudimentary emotions. Not as well developed as huans but still there, Stephanie

Haha Stu, so it was a Rock n Roll ending!

Who can really tell. It is a mistake to apply some emotions to animals but I think many do display them

It does, doesn;t it Roman

AN excelent description for them Sandy. I like it!

It seems likely to me the lot of them are wondering about us.

That would not surprise me Susan!

It's a brave or stupid cat that takes on a Magpie. Robyn caught one. He is brave AND stupid!

What a beautiful bird! I have noticed our chipmunks do what appears to be grieving when there's a dead one around as well. Very interesting, and sad.

It is very interesting. It shows how embedded ermotions are

There is no such phenomen that anything "evolves" in humans or animals.

We have it from the beginning.

Yes! I'm so glad this has been observed by someone else. A few years ago we heard a loud and persistent ack-ack-acking coming from the garden, and found a dead magpie lying on the grass. The noise was coming from around four magpies in the trees overlooking it. The noise continued for hours. Some time later we noticed that the corpse had moved to the far corner of the garden (we thought it a failed attempt by a fox to drag it away). Later still, when the noise had stopped abruptly, we witnessed the four or so magpies swoop down, gather around the corpse, and place surrounding leaves and twigs onto it. Obviously we called it a magpie funeral - it sounded right!
Squirrels also make terrible crying noises when one of their's dies, but I've not seen a funeral and the vigil doesn't last so long!

I witnessed a Magpie funeral first hand yesterday and this morning. I think my dog killed a Magpie yesterday or found a dead one and put in our yard. The other Magpies (like 10 of them) all gathered around it in the yard and have been freaking out ever since. This morning they were all up in one of the trees next to the house making a lot of noise. They have never done this before.