Britain and Iran on collision course... sort of 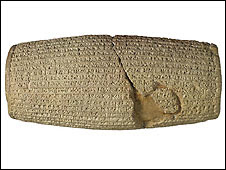 Running separate to the furore over June’s stolen election, or its nuclear ambitions Britain and Iran are in a furious (well sort of) war of words over an important cultural artefact.

According to the BBC the Iranian government has said it will cease cultural co-operation with the British Museum unless a treasure known as the Cyrus Cylinder is loaned to the nation.

A British Museum statement said its trustees have "reaffirmed their intention to lend the Cylinder to Iran" but added that "there are a number of issues and practicalities to be resolved, but the intention is to send it as agreed."

The object, which is around 2,500 years old, was ordered to be made by Persian king Cyrus. It is said to represent the first bill of rights and encapsulate religious toleration.

Given that many of the artefacts at the recent Shah Abbas exhibition came from Iran so it is only fair that an important item is loaned to Iran. After all it was hardly dredged up from the Thames riverbed...
Posted by jams o donnell at 8:36 pm

Give Greece its Elgin Marbles back too!

Personally I think the could go back. HTey would look far better in context

The British Museum have charge of a lot of controversial pieces.

That's very true Cherie. I do thinks it would not hurt for some to go bacj to their countries of discovery. The Elgin marbles to mee look like some sterile and mutilated pieces of sculpture. Perhaps they would be better if reunited with teh missing pieces back in Athens

I don't think the Greek government is going to give up until the marbles are returned.

If the British Museum had to return all the stolen artifacts they'd have lots of space to house England's rising crop of graffiti artists.

I doubt they will Pouty Lips...

Ha you are quite right Susan!

The Iranian government throwing a hissy fit over an artifact that represents religious tolerance...

Anyone else see irony here?

Indeed. but Islm does allow tolerance for religions of teh "Book".. often not honoured sadly and don;t be, say a Baha'i in Iran or you are in deep shit

i would say Mr. Baqaie can get knotted.

To be fair, yes, you are absolutely right Jams. However, what could happen to British Museum (and some royal treasures) if a precedent is created, I couldn't even start guessing.

On the other hand, I can think of a few other cylindrical (roughly) objects the current Iranian rulers have coming to them ;-)

It is a loan rather than a return Snoopy but perhaps precedent could be set with other items.

As for those items, point them at Khamenei and Ahmadinejad and not my friends!