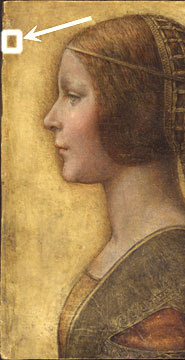 According to the Times carbon dating and infra-red analysis of the artist’s technique are consistent with such a conclusion, but the most compelling evidence is that fragment of a fingerprint.

Peter Paul Biro, a Montreal-based forensic art expert, found the print while examining images captured by a multispectral camera The fingerprint is “highly comparable” to one on Leonardo’s St Jerome in the Vatican. Importantly, St Jerome is an early work from a time when Leonardo was not known to have employed assistants, making it likely that it is his fingerprint.

Martin Kemp, Emeritus Professor of History of Art at the University of Oxford supports these findings. He has rechristened the picture, sold as Young Girl in Profile in Renaissance Dress, as La Bella Principessa after identifying her, “by a process of elimination”, as Bianca Sforza, daughter of Ludovico Sforza, Duke of Milan (1452-1508), and his mistress Bernardina de Corradis.

If it is by Leonardo, it would be the only known work by the artist on vellum although Leonardo is known to have asked the French court painter Jean Perréal about the technique of using coloured chalks on vellum in 1494.

Hmmm I daresay the current owner is, let’s say, pleasantly surprised and perhaps even has dollar signs where his pupils should be. Still there is another benefit: Leonardo’s dabs can go on record... you never know when he might go ram raiding....
Posted by jams o donnell at 7:09 am

And she wears a secretive, alluring, Mona Lisa-esque smile, as well! But in profile!

It is a beauty isn;t it!

Yep, I have a few of those tucked away here.

I see what you mean Aileni

It is always interesting when new ideas come to light :-)

The question is... If it belonged to me, would I sell it or keep it?

Has this painting been authoritatively identified as Da Vinci's? Something about this painting doesn't sit right with me... A bit too cartoonish for Leonardo, don't you agree? A fingerprint means nothing. Leonardo was a teacher and could have simply touched one his student's paintings!

Hmm... a question: can a master faker fake a fingerprint?

I think the emphasis is could be DocuMaker.. Perhaps you are correct and it could have been put there in the circs you describe

If anyone could DaVinci could I am sure Snoopy!

It is amazing how science can contribute to the authenticity of this painting. Comparing this to the other paintings of Da Vinci, there are indeed some similarities. I pity the person who sold it. But maybe the Swiss collector can give him a a gift or something to make him feel good too.

It certainly fascinated me Knatolee!

That would be great chinese translator but I doubt that will happen, somehow