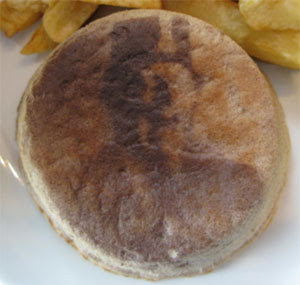 Both regular readers will know that I am partial to a good simulacrum (or a bad one), be it Allahu Akbar written in the seeds of an aubergine, the face of Jesus on a griddle or even Our Lord on the arse of a terrier. It is thus with great pleasure to note the appearance of Caerphily’s greatest son on the base of a pie.

According to Wales Online, chip shop owner Crad Jones was tucking into his normal lunch of pie and chips when he discovered the uncanny image of Tommy Cooper appeared. The simulacrum appeared in the village of Trethomas, just a few miles from Caerphilly.

Mr Jones had the presence of mind to phone manufacturer Peter’s Pies, which arranged for a photographer to take a picture of the ghostly image. Crad Jones said: “I was about to eat my lunch in the shop, as I normally do. I got my Peter’s pie, which I always have with chips and peas, and noticed the resemblance of Tommy Cooper on the bottom of it.”

Staff at the PR company who distributed the picture were quick to deny yesterday that the image of Cooper on the pie was an elaborate publicity stunt.

This is just the latest in a series of dead comedians appearing on foodstuffs. Eric Morecambe appeared on a sugar puff in East Grinstead while Tony Hancock’s face ironically was noticed on a red blood corpuscle in Guy’s Hospital. I have just heard that Michael Barrymore came on to a water biscuit but that may have just been a drinking game
Posted by jams o donnell at 5:18 am

Even as a crusty!

It is indeed Liz!

Yeah, but what was in the pie? Isn't that important?

Good Lord noopy if you don;t know your network must be failing!

Good grief, my friend is from East Grinstead AND I attended my cousin's wedding there back in 1986. Obviously a very special place!

Here in Canuckistan, we had the face of Jesus appear on the wall of a doughnut shop in Cape Breton, NS:

AH Knatolee I did make up those last bits. I love simulacra. I must check the Jesus appearance in Cape Breton!