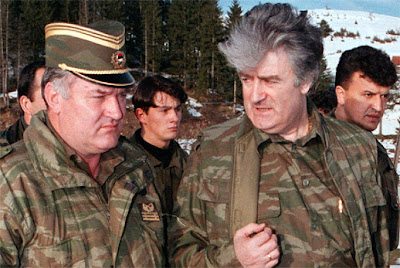 Karadzic with fellow war criminal Rat(ko) Mladic
Tomorrow sees the start of the trial of war criminal Radovan Karadzic. Poet and psychiatrist, convicted embezzler and new age guru, Karadzic was responsible for mass murder and some the most barbaric behaviour in Europe since the Nazis.

According to the Guardian the trial is likely to open with a test of strength. Karadzic insists on defending himself and, after 15 months in detention, maintains he is not ready, having had to plough through around one million pages of prosecution evidence. The judges run the risk of repeating fateful mistakes that handicapped previous big trials, awarding an early psychological victory to the man in the dock.

"Karadzic has learnt the lessons of [earlier] trials and may suspect a lack of confidence on the part of the judges to deal with obstructive tactics," said Sir Geoffrey Nice, the British QC who led the prosecution of the Serbian leader, Slobodan Milosevic. "The judges let Milosevic defend himself. This allowed him to manipulate the system to slow the trial."

Mirko Klarin, who has been chronicling the workings of the court for more than a decade as director of the Sense news agency, believes that the judges have learnt their lessons from past fiascos, and that they may impose defence counsel on Karadzic to try to avoid the trial degenerating into a political circus. "You had a disaster in the Milosevic case, and now you have a looming disaster in the Karadzic case," he said. "The biggest single mistake was letting the accused defend themselves."

Whatever happens, justice must be seen to be done. Whatever he does to obstruct, Karadzic deserves a fair trial (even if he denied that to many thousands of Bosnians).

While it will be good to see him tried and sentenced to rot in prison for the rest of his worthless life, fellow butcher General Ratko Mladic, remains at large...

...Worse still is that Karadzic’s creation, Republika Srpska, born out of genocide, ethnic cleansing and war crimes, still abides....
Posted by jams o donnell at 9:47 am

All that true, however it could be good to see some Bosnian war criminals to see the court too.

Karadzic's strongarm tactics are still not going to save him from the noose. He can discuss this with Saddam when he sees him.

True Snoopy, Bosniaks did some vile things too. That dies not abslove Karadzic though

No rope for him but I hope he has a very long and unhappy life, James

I agree that not only should justice be seen to be done, but that it is done. It should never have taken this long for the trial to start.

Inded Ellee. The trial is over a decade late but better late than never

It's a pity that Madeleine Albright, Bill Clinton and Tony Blair are not joining him in the dock.

There are plenty that dserve a trial Steve


This legal technicality indicates the Hague must dismiss charges against Dr karadzic and others awaiting trials in the Hague jail; like it or not.

Unfortunately for the Signatures Of the Rome Statute United Nations member states instituting the ICC & ICTY housed at the Hague, insofar as the, Radovan Karadzic, as with the other Hague cases awaiting trial there, I personally witnessed these United Nations member states openly speaking about trading judicial appointments and verdicts for financial funding when I attended the 2001 ICC Preparatory Meetings at the UN in Manhattan making the iCTY and ICC morally incapable trying Radovan Karazdic and others.

I witnessed with my own eyes and ears when attending the 2001 Preparatory Meetings to establish an newly emergent International Criminal Court, the exact caliber of criminal corruption running so very deeply at the Hague, that it was a perfectly viable topic of legitimate conversation in those meetings I attended to debate trading verdicts AND judicial appointments, for monetary funding.

Jilly wrote:*The rep from Spain became distraught and when her country’s proposal was not taken to well by the chair of the meeting , then Spain argued in a particularly loud and noticably strongly vocal manner, “Spain (my country) strongly believes if we contribute most financial support to the Hague’s highest court, that ought to give us and other countries feeding it financially MORE direct power over its decisions.”

Some countries agreed with Spain’s propositions while others did not. The point here is, bribery for judicial verdicts and judicial appointments was treated as a totally legitimate topic instead of an illegitimate toic which it is in the meeting that I attended in 2001 that day to establish the ground work for a newly emergent
international criminal court.))))))))))))))))))))))))))))

In particular., since "Spain" was so overtly unafraid in bringing up this topic of trading financial funding the ICC for influence over its future judicial appointments and verdicts in front of every other UN member state present that day at the UN, "Spain" must have already known by previous experience the topic of bribery was "socially acceptable" for conversation that day. They must have previously spoke about bribing the ICTY and ICC before in meetings; this is my take an international sociological honor student.

SPAIN's diplomatic gesture of international justice insofar as, Serbia, in all of this is, disgusting morally!

SPAIN HAS TAUGHT THE WORLD THE TRUE DEFINITION OF AN "INTERNATIONAL CRIMINAL COURT."

I represented the state interests' of the Former Yugoslavia, in Darko Trifunovic’s absence in those meetings and I am proud to undertake this effort on Serbia’s behalf.

What It’s Like to Chill Out With Whom the World Considers the Most Ruthless Men in the World Ratko Mladic, Radovan Karadzic and Goran Hadzic (+) Confessions of a Female War Crimes Investigator


Retrospectively, it was all so simple, natural and matter of fact being on a boat restaurant in Belgrade, sitting with, laughing, drinking a two hundred bottle of wine and chatting about war and peace while Ratko Mladic held my hand. Mladic, a man considered the world’s most ruthless war criminal since Adolf Hitler, still at large and currently having a five million dollar bounty on his head for genocide by the international community. Yet there I was with my two best friends at the time, a former Serbian diplomat, his wife, and Ratko Mladic just chilling. There was no security, nothing you’d ordinarily expect in such circumstances. Referring to himself merely as, Sharko; this is the story of it all came about.

http://shops.half.ebay.com/raretofindreads
(Now Everyone Can Purchase My Rare Books)