Flood myths appear to be pretty universal, so it was not just Noah or Gilgamesh who built boats and saved the world’s fauna (what happened to the flora underwater is not addressed). It was therefore interesting to read this article in today’s Grauniad regarding the translation of a Babylonian clay tablet which describes another one of the world’s flood stories.

The tablet tells the story of the ark, the vessel that saved one virtuous man, his family and the animals from god's watery wrath. The ark was not the huge vessel made of gopher wood (and twice the size of the USS Nimitz... probably) but a giant circular reed raft.

The tablet, aged about 3,700 years, was found somewhere in the Middle East by Leonard Simmons, a largely self-educated Londoner who indulged his passion for history while serving in the RAF from 1945 to 1948. The relic was passed to his son Douglas, who took it to Irving Finkel,a British Museum expert, who translated its 60 lines of neat cuneiform script.

Although tablets describing the flood story are commonplace this one was the first to describe the vessel's shape. "In all the images ever made people assumed the ark was, in effect, an ocean-going boat, with a pointed stem and stern for riding the waves – so that is how they portrayed it," said Finkel. "But the ark didn't have to go anywhere, it just had to float, and the instructions are for a type of craft which they knew very well. It's still sometimes used in Iran and Iraq today, a type of round coracle which they would have known exactly how to use to transport animals across a river or floods." 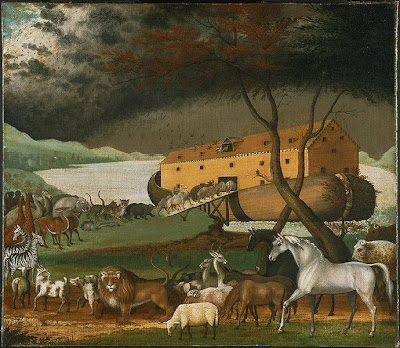 Not the Babylonian Ark
Finkel's research throws light on the familiar Mesopotamian story, which became the account in Genesis, in the Old Testament, of Noah and the ark that saved his menagerie from the waters which drowned every other living thing on earth.

In his translation, the god who has decided to spare one just man speaks to Atram-Hasis, a Sumerian king who lived before the flood and who is the Noah figure in earlier versions of the ark story. "Wall, wall! Reed wall, reed wall! Atram-Hasis, pay heed to my advice, that you may live forever! Destroy your house, build a boat; despise possessions And save life! Draw out the boat that you will built with a circular design; Let its length and breadth be the same."
The tablet goes on to command the use of plaited palm fibre, waterproofed with bitumen, before the construction of cabins for the people and wild animals. It ends with the dramatic command of Atram-Hasis to the unfortunate boat builder whom he leaves behind to meet his fate, about sealing up the door once everyone else is safely inside: "When I shall have gone into the boat, Caulk the frame of the door!"

Despite its unique status, Simmons' tablet – which has been dated to around 1,700 BC and is only a few centuries younger than the oldest known account – was very nearly overlooked.
"When my dad eventually came home, he shipped a whole tea chest of this kind of stuff home – seals, tablets, bits of pottery," said Douglas. "He would have picked them up in bazaars, or when people knew he was interested in this sort of thing, they would have brought them to him and earned a few bob."

This is truly fascinating stuff. I don’t for a second believe in the literal truth of Genesis or Gilgamesh, I am sure that they were inspired by real events – not a universal flood sent down by a God who desperately needed anger management classes but perhaps a memory of events following the Ice Age or simply local floods turned into legend.

One thing I do hope is that the ark of Atram-Hasis fared better than Russian attempts to create a circular battleship in the 19th century: 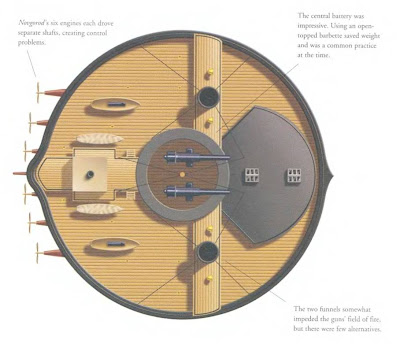 The Novgorod, not the most successful vessel ever launched
Posted by jams o donnell at 11:49 am

That's a cool story indeed. Thanks.

"The tablet tells the story of the ark, the vessel that saved one virtuous man, his family and the animals from god's watery wrath"

Does anyone really think the Babylonian or Sumerian story are from the bible? I am well aware that they are similar but these cultures did not have a belief in just one god.
Why do people still try to throw in things like 'Noah like figure'?
Pure nonsense , Noah evolved from the charectors in these earlier stories , not the other way around.

I suppose some bible literalists do Imperical evidence but only those. Far more likely the Jews picked up the story in exile or by the transmission of the tale itself.

Interesting tales. But I would be very afraid to spread those stories, Jams. I heard, from reliable sources, that God failed at the anger management course. Hope you have a row boat anchored somewhere. Soon, rain will start to fall heavily on your land. Not to worry. The only animals you'll be asked to save are felines.

Thanks Claudia I have a souwester to hand should I need to make that escape!

Just one of the orally transmitted myths that were eventually written down. It is interesting that each myth (whether they be of dragons or floods or of "The First Man") takes on the mores of the culture in which it finally becomes "written in stone". A great flood at the end of the last ice age with a "bottleneck point" for the human species would explain the widespread occurrence of this story. Oops, sorry for going so deep on a Sunday morning.

Fascinating post. Love Claudia's comment! We could do with an ark or two in Italy tonight! Happy New Year, jams.

The star of our high school performance of Benjamin Britten's "Noyes Fludde" had quite a wit. Occasionally in rehearsal, he'd begin the Ark soliloquy, chanted by God and Noye, a tiny bit differently:

Three hundred cubits
It shall be long,
And fifty broads
To make it strong.

Heh. As lead alto recorder player, I had the pleasure of playing (musically, not on stage) the dove. I'm still a dove, but playing the recorder is more difficult now.

Hello Jams,
Just called by via Welshcakes site,
I havn't visited yours for a long time ...I'm not sure why...so hello again.
This is a most interesting story about the Ark, i was quite captivated reading it.
I'm so sorry that your lovely cat Mimi died but glad you have a new feline chum.
What did you do to your leg?
Anyway, all goood wishes for the New Year,
From a very cold and frosty Liverpool,

Thanks everyone. I am glad you found it interesting.

Archie Thanks for your comment, I am sure you are correct

Lessee now,
a pair of every single known species of land animal lived within walking distance of Noah's house?

Very interesting! Seems a very practical thing to do in those times to move animals to safety and save one's neck in the process!

Maybe a son of Noah was a pied-piper. He called the species and they followed, two by two. He must have been a drill sergeant too. Picturing the story is getting to be fun, Jams.

But of course Stu!... It is so ludicrous but as a myth it is interesting

I feel pretty sorry for the guy who caulked the door though Pagan!

Haha Claudia, I can hear the son with teh animals singing "I don't know but I've been told, rainwater is mighty cold.. sound off one two... and so on!!...

I think you'd be likely to enjoy Graham Hancock's 'Underworld'. It's both fascinating and a very reasonable account of what likely happened at the end of the ice age. Joseph Campbell among others reported flood myths world wide and where there's water there may be un-found and un-looked for secrets.

Thanks Susan I will have to look up Underworld

Thanks for bringing this article to my attention, Jams — it would have passed me by otherwise. Coincidentally I read something recently about the great flood, in a book by Julian Jaynes. He quotes Gilgamesh, Tablet II, lines 113-114:

Even the gods were terror-stricken at the deluge.
They fled and ascended to the heaven of Anu.

So when the flood story was added to Gilgamesh (apparently in the 7th century BC), the deluge was used as a rationalisation for the gods' departure. Jaynes contends that people once had a common ability to hear the gods, but lost this as they became 'conscious'. Funny how the Bible made such a different myth out of it.

Fascinating Stan. THe Paps in Kerry are called teh Paps of Anu....I wonder if Gilgamesh liked his football!