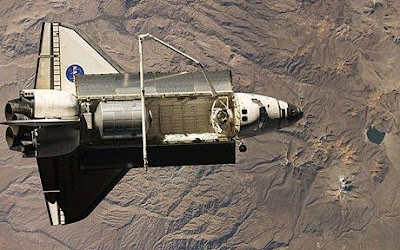 Are you a budding galactic emperor but are at a loss as to how to make a start? Or perhaps your neighbour has bought a swanky new car and you want to wipe his eye.. Then your prayers may have been answered.

For a mere $28.2m you can be the proud owner of a space shuttle with just one careful owner. Nasa has promised Discovery to the Smithsonian Institution's National Air and Space Museum, but shuttles Atlantis and Endeavour are still available.

Nasa decided to sell the shuttles ahead of their retirement later this year. They are set to be replaced by the new Ares 1-X rocket, which is due to take over all manned space flights in 2015.

There is one problem. The shuttles do not come with engines, But that should not be a problem as Nasa are now offering them free, to anyone with the wherewithal to take them home.

Time to get my credit card our, methinks!
Posted by jams o donnell at 8:43 am

NASA is just trying to help pay for our healthcare disaster! Come on, we need the bucks!!!

Just the gift for the dictator who has everything!!!!!

I'll take a few F-22s and the Carl Vinson too Sandy!

ANd the earth is simply not enough Kay!

Endeavour please, Jams. When can I expect delivery or must I rocket over to collect?

Will I have to learn how to drive?

I heard an article today about this, and the countless other artifacts that were being sold.

I wonder if they're selling the lab that sits in the cargo bay. That would make for an interesting side building or architectural element.

James delivery will be £1bn, payable in tizer and curly wurlies. Creme Eggs and Vimto will be okay too

Claudia, if this is yur first foray into evil overlording then a package of acolytes can be provided for a small additional costs

Catsynth now that would be impressive!

Forget it, Jams, the steering wheel is on the left!

Pah! A minor impediemnt to a budding dictator!

I have some land up north...it might make a good lawn ornament.

Well there you go. make a bid!