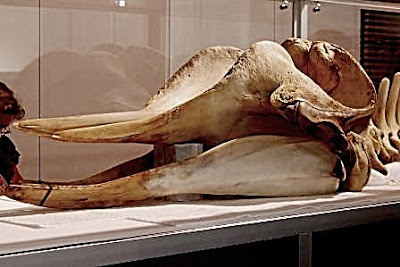 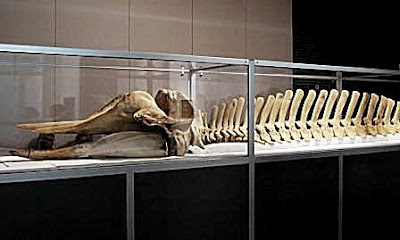 The theme for this week's Photo Hunt is bulky. Being at a bit of a loss and not wanting to go for the obvious (one of my large fluffy male cats - see post below for one in all his glory!) here are some photos I took when the bones of the River Thames Whale were put on display at the Guardian visitor centre for a few days in January 2007.

Before it died - rescue attempts failed sadly - it weighed about seven tones and thus was bulky in life
Posted by jams o donnell at 8:11 pm

a whale in the Thames? what a sight that must have been... was it a regular denizen or did it wander into the inner waterways by mistake?

What a great idea for the theme. Sad the whale didn't make it. I've seen a beached whale at Nantucket, MA, U.S. and it's so sad to see those enormous animals when they can't be saved. Happy Weekend.

Cool shots of that big bulky whale and a great take on the theme. And Boris is adorable! Happy weekend.

fantastic idea for the theme. they were bulky creatures.

this week i am shaking it up a bit and posted my entry over at my other blog. here is the link:

THanks everyone. It is a shame it could not be saved

Sad story but very interesting. Heartwarming that so many people tried to help.

Its a wonderful idea
you are very creative :-)

I don't think you would have got that close to one in its original state!

What a clever take on the theme!
Happy weekend!

I think yours will be the most unique take on the theme :-)

I realise that whale would have been way bulkier in life but even after death, its bones surely aren't too be sneezed at in the bulkiness stakes! ;b

Yeah, bulky animals have bulky bones and so your choice is really quite good -- one night even call it inspired!

Wow, 7 tonnes! I cannot imagine the size of it.
Happy weekend, jams!

No kidding. Very bulky indeed. Even the skeleton is impressive.

i felt sorry for the bulky whale. great choice for the theme.

coming from a whale...bulky indeed!
nice take on the theme.

EXCELLENT Jams!! I'm thinking that there will be a lot of 'bulky coats and sweaters' today, so yours if just perfect...and unique. I like it a lot.

You ask how cold is it here in South Texas?.....well, my answer [and bulky plumage of bird] is my Photo Hunt Post today. LOL

I'm sorry the whale did not make it. Maybe he was too bulky!?

Gosh, Boris sure has a deep orange coat; it's a beautiful color.

that's really sad that the whale didn't make it. I saw it on the news. That's a good take on the theme. happy weekend!

Wow! That's a lot of weight to carry for a whale. Nice one Jams :)

I'd say whales are bulky!

Wow!! I'm off to read more about this, thanks for the link.

I goofed for Photo Hunters this week, and did "12" instead of "Bulky." :S Oops. But I decided to leave it up because it's appropriate for this week... and because I didn't want to spend an hour doing a different post! I hope you can visit.

It's a whale wow!! I thought at first without reading it's some kind of a dinosaur. Thanks for sharing!

That is one bulky set of bones. Too bad it did not survive but at least they were able to put the bones to good educational purpose.

Cool photos! Great take on the theme this week. I found this theme to be a tough one.

That is really interesting....

How cool is that. Great take on the theme. I love all the different ways people can approach it.

What a great take on the theme. Really interesting