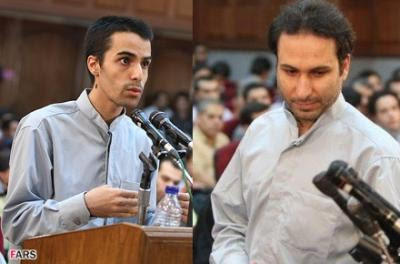 The BBC reports that the Iranian regime has executed two men convicted of being "enemies of God" and members of armed groups and trying to topple the Islamic establishment. They were named as Mohammad Reza Ali-Zamani and Arash Rahmanipour (above)

According to a statement from the Tehran prosecutors office "Following the riots and anti-revolutionary measures in recent months, particularly on the day of Ashura, a Tehran Islamic Revolutionary Court branch considered the cases of a number of accused and handed down death sentences against 11 of those... The sentences against two of these people... were carried out today at dawn and the accused were hanged,"

Mr Ali-Zamani was sentenced to death in October having been convicted for ties with the Kingdom Assembly of Iran (Anjoman-e Padeshahi-e Iran), a banned monarchist group. At his trial in August, prosecutors accused Mr Ali-Zamani of plotting political assassinations with US military officials in Iraq before returning to Iran "aiming at causing disruption during and after the election".

Human rights activists noted that the indictment stated that Mr Ali-Zamani had been arrested before engaging in any actions relating to the protests.

Mr Rahmanipour was arrested in Farvardin [the Iranian month covering March-April] - before the election - and charged with co-operation with the Kingdom Assembly. He was 19 when he was arrested, and that many of the charges related to the time when he was a minor.

Hmm so both of these men were under arrest before the fixed election and the subsequent protests? These and the future executions (I doubt many sentences will be comuted) are an indication of a government that is trying to rule by fear a population that is no longer scared. As I have said many times before I look forward to the day that this regime is flushed into the cesspit.
Posted by jams o donnell at 8:28 pm

No flags burning in Islamic countries?

I read they called Ali-Zamani and Arash Rahmanipour "enemies of god".
Thus, those ruthless criminals claim not only they asked their existing or not existing god, they do even pretend they got an answer.
Morons!

Absolutely. The regime is insane

Yeah, and some morons called Iran of today "vibrant democracy"...

I'm watching the news this Saturday morning and the big debate today is whether Israel will strike Iran now that Iran has achieved 20% nuclear enrichment. I am afraid this will ultimately lead to war. I do think that there is a zero percent chance of the US striking. But were' in bed with Israel so...

O'm not sure that is the answer either sadly...