The first plane in Antarctica 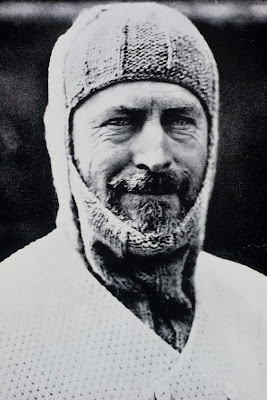 Sir Douglas Mawson
Mawson's dream of staging the first human flight over the Antarctic ice cap, less than a decade after the Wright brothers made the first powered flight, was shattered even before his expedition sailed. The plane crashed in a demonstration flight in October 1911. No one was hurt, but the wings were damaged. With no time for repairs, Mawson removed the wings and took the rest of the plane to use as a flightless "air tractor".

The 1911-14 Australian Antarctic Expedition used the plane to tow gear on to the ice in preparation for sledging journeys. But the plane's engine could not withstand the extreme cold and it was eventually abandoned.

Okay so it never flew in Antarctica. It was a shame the plane got totalled before it reached Antarctica but given that the engine could not handle the cold I fear that it would have come to a sticky end had it arrived intact. Still the article has given me a name to research. I know virtually nothing about Mawson so I will have to find out more about his explorations. It would seem that he has been overshadowed, in the UK at least, by the likes of Scott and Shackleton.
Posted by jams o donnell at 1:57 pm

That sort of mentality must never be lost.

By no means Damon!

Mawson is a very famous adopted South Australian. He taught at the University of Adelaide for many years. His artefacts are here and there are suburbs and important buildings named after him.

Thanks Colin. I will have to find out more about him

What an incredible find!

Thanks Sandy. It really is

Well it was more probable than ballooning across the arctic.