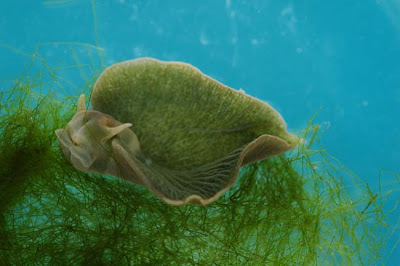 Live Science reports on the discovery of a sea slug that is in one sense part animal and part plant. It produces chlorophyll and so it is the only animal that can carry out photosynthesis.

"They can make their energy-containing molecules without having to eat anything," said Sidney Pierce, a biologist at the University of South Florida in Tampa.

Pierce has been studying Elysia chlorotica, for about 20 years. He presented his most recent findings Jan. 7 at the annual meeting of the Society for Integrative and Comparative Biology in Seattle. The finding was first reported by Science News.

The sea slugs live in salt marshes in New England and Canada and are believed to have appropriated the genes needed to make the green pigment chlorophyll. This on its own is not enough for photosynthesis: the slugs cannot produce chloroplast, the organelle where photosynthesis takes place.. These are obtained by eating algae.

As long as they receive sufficient light they can survive without food. Furthermore the trait is passed on to offspring

This is fascinating stuff, with major implications if the mechanism for incorporating genes can be determined. I never ever thought that such a complex creature would be part plant so to speak (nut only so to speak). That said I have met a few people who are so thick they probably need watering!
Posted by jams o donnell at 12:01 am

This is incredible, Jams. And thanks for the link to LiveScience. There are so many fascinating facts to read. I put it on my "Favorites" next to your blog.

With a bit of genetic engineering they could incorparate that into humans and reduce the problems of feeding the population.

Now there's a though Steve!

Amazing news. I've long loved nudibranchs — they are so beautiful and varied — and I'm genuinely surprised by this story. The implications, as you say, are potentially enormous.

It is truly amazing isn't it Stan?

Ah but if you were like the sea slug you could sit in the sun and not have to!