Penguin perversions finally revealed after a century of suppression

George Murray Levick was a scientist in Scott's final Antarctic expedition. Not for him was there a  vainglorious attempt on the South Pole. His interests were in the local fauna... and what he witnessed among the Adelie Penguin population was so truly shocking that he removed some observations from his paper Natural History of the Adélie Penguin

Although the sight of a young male Adélie penguin attempting to have sex with a dead female unnerved Levick, he discovered far worse. Over the  Antarctic summer of 1911-12 while observing a colony of Adélies at Cape Adare (and thus becoming the very first  scientist to this day to have studied an entire breeding cycle), he witnessed males having sex with other males and also with dead females, including several that had died the previous year. He also saw them sexually coerce females and chicks and occasionally kill them. 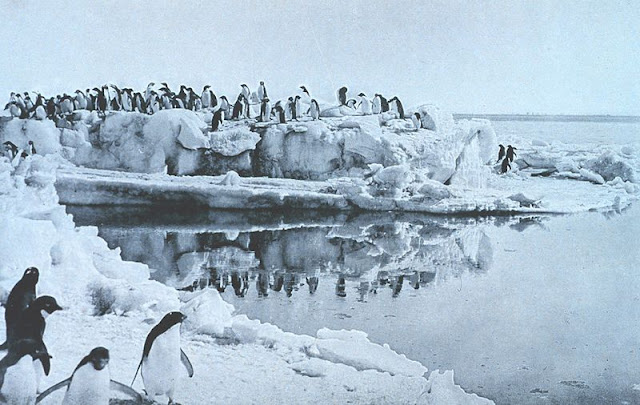 Levick blamed this "astonishing depravity" on "hooligan males" and wrote down his observations in Greek so that plebs would not be able to understand them He omitted these observations from his main paper but did use the material as the basis for a separate short paper, Sexual Habits of the Adélie Penguin, which was privately circulated among a only handful of experts.


Scientists had to wait another 50 years before the remarkable sexual antics of the Adélie were revealed. By this time his pamphlet and its detailed records of Adélie shenanigans had been lost to science .

However a copy of Sexual Habits of the Adélie Penguin has been unearthed, thanks to Nicholas Russell, curator of birds at the Natural History Museum, who discovered a copy among records of the work of Scott's expeditions and has had it published in the journal Polar Record.

Levick's lost masterpiece certainly has its eye-watering moments with its descriptions of male Adélies who gather in "little hooligan bands of half a dozen or more and hang about the outskirts of the knolls, whose inhabitants they annoy by their constant acts of depravity". Injured females are mounted by members of these "gangs", others have their chicks "misused before the very eyes of its parents". Some chicks are crushed and injured, others are killed.

It is startling stuff, though Russell told the Observer that recent studies have helped understand the behaviour of these "hooligan" penguins. "Adélies gather at their colonies in October to start to breed. They have only a few weeks to do that and young adults simply have no experience of how to behave. Many respond to inappropriate cues. Hence the seeming depravity of their behaviour. For example, a dead penguin, lying with its eyes half-open, is very similar in appearance to a compliant female. The result is the so-called necrophilia that Levick witnessed and which so disgusted him."

In addition, the penguin is the most humanlike of all birds in its appearance and its behaviour is most often interpreted in anthropomorphic terms, added Russell. For this reason, Adélie behaviour, when it was observed for the first time in detail, seemed especially shocking. "Levick was also a gentleman, travelling with a group of men in very difficult circumstances, witnessing behaviour he neither expected nor understood," said Russell. "It is not surprising that he was shocked by his findings."
The discovery ofLevick's paper is important because its helps shed new knowledge on a species that has been called the bellwether of climate change. "The Adélie needs pack ice from which to dive to get fish. When that ice disappears, numbers may crash – and we will have a clear warning that things are getting bad," said Russell.

Levick's experiences with the Adélie penguins were not the only root of his suffering in the Antarctic. In February 1912, he and five other members of Scott's team were waiting to be picked up by the expedition ship, Terra Nova, but found that pack ice had blocked its route. The men had to spend an entire Antarctic winter huddled in an ice cave with no provisions and only an occasional seal or penguin to eat. "They ate blubber, cooked with blubber, had blubber lamps," recalled one expedition member. "Their clothes and gear were soaked with blubber, and the soot blackened them, their sleeping bags, cookers, walls and roof, choked their throats and inflamed their eyes."

Remarkably, the men all survived and Levick returned to England in 1913 – in time to sign up for the first world war. He served in the Grand Fleet and at Gallipoli, and after the war founded the British Schools Exploring Society in 1932, of which he was president until his death in June 1956. An obituary described him as "a truly great English gentleman".

Ah well it looks like penguins are going to Hell too!
Posted by jams o donnell at 5:33 pm

I dread to think what sort of thoughts it provokes!

Thoughts about evolution, our place in the animal kingdom, the issues of morality, responsibility, the existence or otherwise of freewill, the attempts to distinguish ourselves from the beasts of nature, even as we adopt and pander to them as pets... Thoughts of Ted torturing mice and birds (given the chance) while being much loved, and of us killing chickens and pigs and cows to eat, and of people that kill other people in the name of peace and... (enough?)