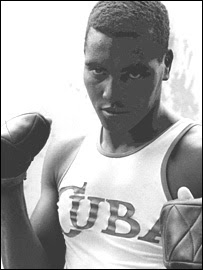 Teofilo Stevenson, one of the greatest ever amateur boxers, has died in Cuba at the age of 60.

Born in Cuba in 1952 of Caribbean immigrant parents, Stevenson first boxing  success came in 1971 when he won a bronze medal in the Heavyweight division at the Pan American Games in Cali in Colombia.Greater success came at the Munich Olympics where at the age of just 20, he won the first of three olympic gold medals - he retained his title at the Montreal and Moscow games,

Stevenson, along with fellow Cuban heavyweight Felix Savon and Hungarian Middleweight Laszlo Papp, as the only Olympic boxers to win three consecutive gold medals. Stevenson may have won a fourth had Cub not boycotted the Los Angeles games in 1984.

Perhaps the greatest pity was that he never turned professional. It is said that he was offered a large sum to fight Ali. Had Stevenson done without preparation Ali would have wiped the floor with Stevenson. However if Stevenson had gained experience in the pro ring (amateur and pro boxing are different beasts)  then this may well have been one the greatest fights ever. Alas we will never know.

Yep. He was a great one. I remember.