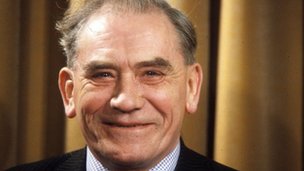 Raymod Mawby - Tory MP and Czech spy (Photo from BBC News)
The Independent  reports that a former Tory MP and junior minister spied for the Czech security service in the 1960s.

Raymond Mawby, who served as MP for Totnes from 1955 until he was deselected in 1983 and who died in 1990, was in its pay for a decade, Apparently Mawby was a gambler and began accepting "loans" while playing roulette and other games. He later went on to accept payments, usually for £100 a time, for information and was given the codename Laval.

Mawby supplied spies with a floorplan of the prime minister's Commons office, lists of parliamentary committees, information about colleagues and a supposedly confidential parliamentary investigation into a Conservative peer, He also promised to carry out tasks such as asking questions in Parliament according to the "needs" of the Czech security service according to documents written by a Czech handler in 1962 show.

When Mawby became  a junior minister in 1963 his handler feared the promotion could end their arrangement as it meant a salary increase of £2,000 a year, but the MP continued the arrangement.
As well as supplying information about the layout of the PM's parliamentary office, he provided details about its security arrangements. The relationship ended in November 1971.

So while Mawby was not a traitor (a traitor in law is someone convicted of treason and he would not have been so convicted) He did damage to his country by undertaking espionage for an enemy state. Even if his information was not particularly high level he would have been convicted under the Officia SecretsAct and would have expected a sentence of up to 14 years.

All of this is academic of course as he died over 20 years ago. I wonder how many other skeletons there are waiting to be let out of the closet.
Posted by jams o donnell at 1:44 pm

Goes a long way to prove that even Tories need money. Which means, in essence, that Britain is a true democracy, where all and one need some income.