A month for wearing trousers 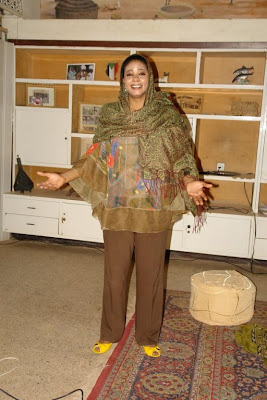 Sudanese journalist Lubna Hussein faces up to a month in prison after being convicted of indecency. According to the Independent she was not sentenced to a beating of 40 lashes as is common with such a conviction but instead was given a $200 fine.

"I will not pay a penny," she told reporters at the court in the Sudanese capital, Khartoum. "I won't pay, as a matter of principle. I would spend a month in jail. It is a chance to explore the conditions in jail."

Ms Hussein quit her job with the United Nations to strip herself of immunity and fight the charge, attended the hearing wearing the same trousers she had worn when arrested. The pair of loose green slacks have now been seen around the world as Ms Hussein has attracted global headlines in her battle.

The 43-year-old widow has emerged as a powerful campaigner against Sudan's strict laws that limit how a woman can dress, and vowed to appeal against the conviction to the country's highest court if necessary. She has said she would tolerate "40,000 lashes" if that's what it takes to change the law.Public support for her has surprised authorities in Sudan and before yesterday's hearing dozens of women wearing trousers and protesting outside the court were arrested.

"Lubna has given us a chance. She is very brave. Thousands of girls have been beaten since the 1990s, but Lubna is the first one not to keep silent," one of the protesters, Sawsan Hassan el-Showaya, told Reuters.

T he trial has become a test case for women's rights in Sudan. The journalist was arrested in July at a party in Khartoum along with 12 other women and had faced the possibility of 40 lashes for wearing trousers deemed indecent. Ten of the other women arrested at the same time have since pleaded guilty and suffered a public flogging.

Campaigners in Sudan complain that the decency code gives too much latitude to individual policemen, leading to often arbitrary arrests. Article 152 of Sudan's penal code states that "indecent" dress among women is punishable by a fine and public flogging. Amnesty International called on Sudan to review the law. "The penalty called for by the law, up to 40 lashes [is] abhorrent," said Tawanda Hondora, Amnesty's deputy Africa director. "Women are routinely arrested, detained, tried and then, on conviction, flogged simply because a police officer disapproves of their clothing."
Posted by jams o donnell at 8:16 am

When some gimlet eyed fanatic says so James

you look nice in the trouser.. just neglect all stupid comment...

This is the sort of thing that happens in countries where women are considered mere chattel. Good for this gal!

Just as I hit 'send' I hear this same news on our TV here in the States!

Ms Hussein's tough stance did not prevent the other woman from being painfully humiliated, though.
Probably the "judges" thought: Let her pay 140 Euro. So we can pay the floggers and buy 100 new lashes.
May they lose all teeth except one - for permanent toothache!

I admire her for her courage and I feel blessed to be living in the U.S.

I don't know what to say. Not sure I would go and protest in Sudan wearing slacks. Not sure I would want to experience jail in Sudan instead of paying the fine. Not sure if her brave action will prevent other women's punishments for so called indecency. Not sure of anything when this is happening right in front of our eyes, and we're totally powerless, unable to protect the women who live under those laws. The global community and inter-connection seem to be a myth. We know everything and we do nothing but speak words, and words, and words.

She is making a stand where she could have gotten away with a relatively small fine. But the others have been flogged for a similar idiotic charge.

wow...this shows how blessed we are in America.

In so many ways Gina

"I hope that the Sudanese government can be shamed into changing its attitude..."

I don't nurture such hope.

One can hope Snoopy!