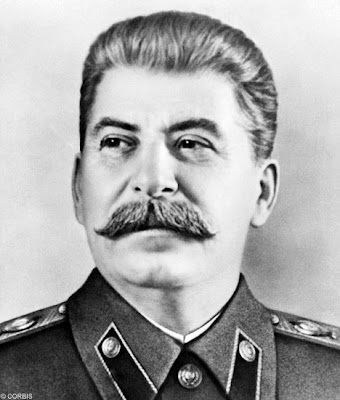 EVIL
It is a matter of historical fact that Joseph Stalin was a jovial and gentle man who liked nothing more that robust debate with people of differing views and a good joke at his own expense. Any other view of course is simply imperialist propaganda... Well that’s what I’ll believe when I can go ice skating in Hell... 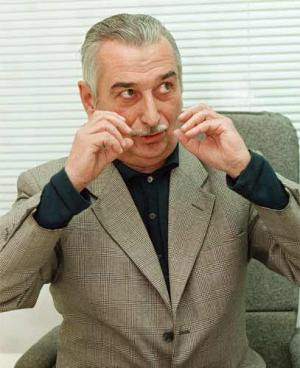 DELUDED
But reality does not stop others from pirouetting on the place where Beelzebub’s flames burned bright. Stalin’s own grandson (above) is one such person. According to the Independent, Yevgeny Dzhugashvili has launched a libel suit against one of Russia's leading liberal newspapers, accusing it of lying in an article which stated Stalin had killed Soviet citizens.

"Half a century of lies have been poured over Stalin's reputation and he cannot defend himself from the grave, so this case is essential to put the record straight," Mr Dzhugashvili's lawyer, Leonid Zhura, told Reuters.

Dzhugashvili is the son of Yakov, who was killed during the Second World War. (see my posts Red Cushing and the Many Deaths of Yakov Stalin part 1 and part 2) His’s wrath was raised by a Novaya Gazeta publication which referred to declassified secret documents ordering the execution of Soviet citizens and which are said to bear Stalin's personal signature. The lawsuit also accuses the human rights organisation Memorial of libel. It has collected testimony about victims of Stalin's terror and the article appeared in a pamphlet that it published jointly with the newspaper.

There is increasingly bitter conflict over control of Stalin's legacy. Over the past decade, the Kremlin has sought to portray Russia's victory in the Second World War as the most significant historical event of the 20th century. Attention has been focused on Stalin's supposedly heroic wartime leadership, and away from his crimes and repressions. Last week, a Moscow metro station reopened after renovations, and horrified liberals found that an inscription lauding Stalin, which had been removed from the station after his death in the 1950s, had been restored.

"Stalin raised us to be loyal to the nation, inspired us to labour and great deeds," says the inscription, which is taken from an early version of the Soviet national anthem. Sergei Mitrokhin, the leader of the liberal Yabloko Party, called the inscription "scandalous" and said that Stalin had perpetrated a "monstrous genocide".

Mr Zhura came to Stalin's defence "He turned populations into peoples, he presided over a golden era in literature and the arts; he was a real leader. We want to rehabilitate Stalin."

On a related note Memorial is in court over a separate lawsuit linked to the kidnapping and execution of one of the group's leading activists, Natalya Estemirova.. Oleg Orlov, the head of Memorial, voiced what many were thinking after her death and said that Ramzan Kadyrov (below) was responsible, at the very least because he presided over a country where such crimes could occur with impunity. Several of Mr Kadyrov's enemies and critics have met nasty ends over the past year but the chances of Mr Kadyrov being put on trial or questioned over any of the murders are infinitesimal. 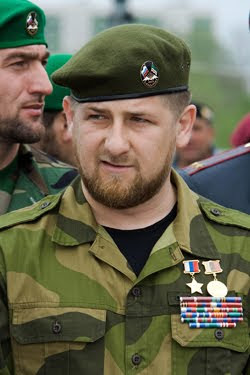 VILE
On Monday, hearings took place in a different courtroom into a lawsuit between Mr Kadyrov and Mr Orlov. Instead of it being a chance to put the Chechen leader – who has been accused of gruesome crimes – in the dock, the court heard a libel action by Mr Kadyrov against the Memorial head.Mr Kadyrov accuses Mr Orlov of "insulting his honour and dignity" by saying he was responsible for Ms Estemirova's murder and demands compensation to the tune of £200,000.

Hmm Stalin and Kadyrov – evil writ massive and evil writ on a smaller scale, but here with the emphasis on writ. I hope both cases are laughed out of court. Something tells me that the best we can hope for is a smirk in both cases...
Posted by jams o donnell at 2:50 pm

Over the past decade, the Kremlin has sought to portray Russia's victory in the Second World War as the most significant historical event of the 20th century.

Well, let's just say that they took the brunt in WWII and we would have been overrun if the Stalingrad thing hadn't happened.

At the end, the German fighters were getting significantly better than the Brit planes and thus the three really significant points, which should be given equal weight were:

1. Without us, there'd have been nothing left for the Americans to rescue;

2. Without the Russian hit to the German solar plexus, we'd have been overrun;

3. Without the Americans, it would have, at a minimum, gone some more years and at its worst, we'd now be German, if we were alive.

It was an american/soviet hammer and anvil that destroyed the Reich. No doubt about that.Stalin finally listened to his generals which is one better than Hitler. It does not mean Stalin was not a monster though

Agreed, he was a monster!

No other description fits Cherie!

My friend Roger Hitler wants to defend the reputation of his dear dead grandpa - can you recommend a lawyer?

I'm sure Schllings will take him on Mutley!

Why would I think thaqt some Scdhillings would be enough to save the reputation of such bastards!

And why would I not mind the thought of Kadyrov's testicles being guest themselves in the honourable President's private torture etablissement?
Can evil bastards cause decent people to have evl thoughts?

The said companies previous august company Sean? I would not rush to extricate Kadyrow either Sean so I suppose they do!

I do believe that the victory in WWI was a very significant event, and I agree with what James H. says here.

However, it has nothing to do with that homicidal maniac who indeed was not better than Hitler. And re "honour and dignity" of Kadyrov - more honor and dignity could be scraped from the bottom of a garbage container in a lepers' colony.

I agree with both of you and I agree that Stalin was little bwetter than Hitler, Hell if he had lived there may have been a Holocaust worse than the one Hitler put in place