The Smell of Space 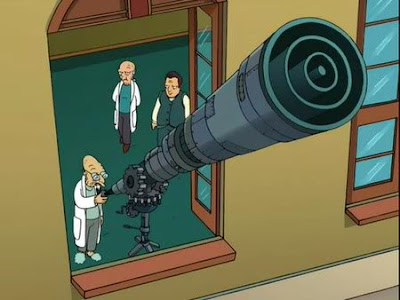 It was, Hubert Farnsworth, the mad scientist in Futurama who invented the smelloscope, which allowed him to smell anything anywhere in the universe. Of course that should be impossible but hey, it was a cartoon...

Strangely Discovery On reports that NASA astronauts aboard the US space shuttle Discovery have said that the space in fact does have a smell and it is strong, metallic and unique.

“There is one smell up here that is really unique though and that is the smell, we just call it ‘the smell of space’,” said NASA engineer and astronaut Gregory Chamitoff, who is on board US space shuttle Discovery.“I haven’t had a chance to do a spacewalk yet, but when the other guys did and they came back in, there’s this really, really strong metallic smell,” he added.

For rookie astronaut Kevin Ford, Discovery’s pilot, both the sounds and smells of space have surprised him.
“It’s like something I haven’t ever smelled before, but I’ll never forget it,” he said. “You know how those things stick with you,” he added.

I bet you didn’t know this, did you
Posted by jams o donnell at 3:25 am

I swear I've detected a scent thousands a mile from it's origin. and sometimes even through the television, so it doesn't seems so far fetched.I'd just want o make sure it ws focused on chocote chip cookies or strawberries :)

I'd want the smels to be similar to the ones you chose!

So who was brave enough to "go outside" take their helmet off and take a sniff? Or is it the smell of the Space station they are describing:)

Hmm good point. If they took off the helmet then I doubt they would be around to describe the smell!

I'd have to agree with Angus on this one. If I dressed up in a hermetically sealed spacesuit, could I smell anything at all, even on Earth? Sad to say, we won't be seeing Prof Farnsworth's smelloscope any time soon...

Very true egg. Shame we won't have the smelloscope for nigh on a millennium though!

I guess if the astronaut would take off his helmet, he would immediately smell unpolluted Heaven!

Not a teeny bit of the blarney this, is it, Jams?

Blarney James? I never tell anything but the truth! Actually this is as reported

I think I heard about this on QI. (Where I get most of my info!)

But how does one smell the space? I mean, in a vacuum suite you have to open the... whatever they open to get the nose out to sniff around.

Unless the guy talks about the smell inside the vacuum suit. Oh no...

An excellent source of info Liz!

Perhaps the smell would ahve been different if they had chilli beans Snoopy!

They smell it after they come back in from their space walks. I hate being the voice of reason here but someone has to do it.