Nothing new under the sun - gender controversies in athletics

Castor Semenya is far from being the first person to be embroiled in a gender controversy. The Telegraph and Time Magazine have been a mine of information on past controversies: 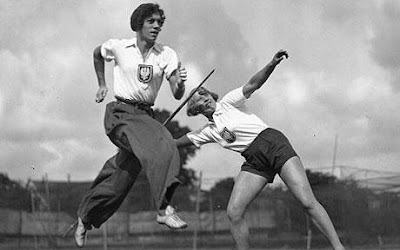 Stanisława Walasiewicz (Above - also known as Stella Walsh) Represented Poland in the Women’s 100m at the Los Angeles (1932) and Berlin Games, winning gold and silver respectively. She subsequently had a long and distinguished track career in the USA

Walsh was killed in 1980, after being caught up in an armed robbery of a department store in Cleveland, Ohio. An autopsy revealed she had male genitalia, which immediately questioned the validity of her athletics achievements. The examination indicated that Walsh suffered from a condition called mosaicism, which meant she had both XX and XY chromosome pairs.

Ironically, Helen Stephens who beat her to the gold medal at Berlin had been accused of being male herself and was forced to submit to a genital inspection to prove otherwise...

Hermann (Dora) Ratjen (above) was most definitely male but competed for Germany as a woman at the Berlin Games. He disguised himself as a woman by tightly binding his genitals to his body while competing in the high jump at the 1936 Berlin Olympics. Ratjen finished fourth in the competition, and later set a world record at the European Championships in 1938. He was revealed as a man after two athletics fans spotted him with facial hair at a train station in Germany. A doctor was called, and a brief examination confirmed he had male genitals. Ratjen never competed again, and in 1957 admitted he was actually a man, claiming the Nazi regime had forced him to compete as a woman. “For three years I lived the life of a girl. It was most dull,” he said.

Sin Kim Dan, a delicate North Korean, broke the women's records at both 400 meters and 800 meters in 1964. Sometime later an overjoyed gentleman in South Korea recognized Sin as the son he had lost in the war. 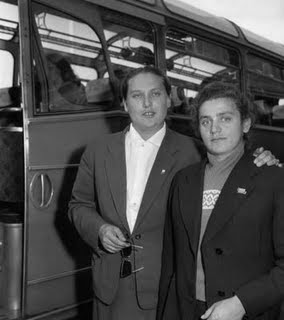 Tamara and Irina Press
In 1966 the IAAF introduced physical tests to prove that all female contestants at the European championships were, in fact, women. Strangely some of the biggest stars of track and field failed to show up for one reason or another. Russia's Press sisters, Tamara and Irina, who between them own four world records (known to their competitors at the time as "the Press brothers") stayed home to care for their sick mother. Russian Runners Tatiana Schelkanova and Maria Itkina were side lined with undisclosed injuries. Rumania's 6 ft. World record holding high jumper Iolanda Balas went to Budapest—but only as a spectator. Perhaps their absences were just coincidences 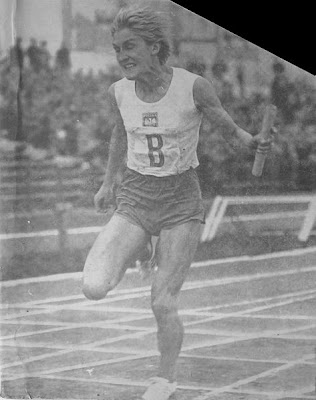 Sadly in 1967 Polish athlete Ewa Klobukowska became the first athlete to fail a chromosome test. Ewa was raised as a girl and always thought of herself as a girl and competed as a woman at the Tokyo Games, winning gold in the 4x100m relay and a bronze in the 100m. The following year she set a world record for the 100m.

In 1966 she submitted to the sex test at the European Championships in Budapest and passed as a woman without question. She went on to win golds in the 100m and 4x100m relay plus silver in the 200m

The following year the I.A.A.F. ordered chromosome tests for competitors at the 1967 European Cup. Ewa readily provided the cell scrapings for the test. She was then hit by a bombshell when three Russian and three Hungarian doctors gave the fatal verdict: Ewa is not a woman because she has "one chromosome too many."

The nature of her chromosomal anomaly was never disclosed but she was banned from further competition.
Posted by jams o donnell at 12:01 am

... and Jarmila Kratochvílová comes to my mind.

Well not a lot changes and that's for sure Sandy!

Did you see Mock the Week on this topic? Quite a few funny - and valid - points raised.

Sadly I didn't Liz. Been catching up with tv but the not-wife forgot to record Mock the Week

It's been a really interesting story to follow and this look at others is interesting too.

Remember when that male tennis player changed sex and then competed on the women's circuit? The name escapes me for the moment.

It is an interesting issue. I hope Semenya is vindicated

THe player was Renee Richards I think the only person to play in the men's and women's singles at the US Open!

Your insights is incredible
I'm impressed