Relics of the Little Flower on tour 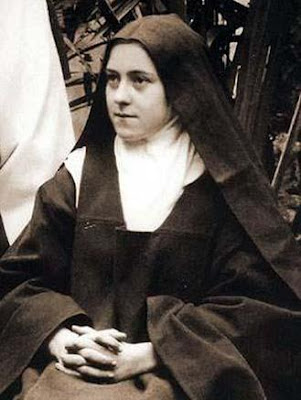 Today’s Times reports that bodily remains of St Thérèse of Lisieux have arrived in Britain for a month-long tour of England and Wales.

Born in 1874 Marie-Françoise-Thérèse Martin, St Therese was a Carmelite Nun who is best known for the “Little Way” – carrying out even the most mundane tasks with love.

"Love proves itself by deeds, so how am I to show my love? Great deeds are forbidden me. The only way I can prove my love is by scattering flowers and these flowers are every little sacrifice, every glance and word, and the doing of the least actions for love."

In effect a good, ided a saintly life can come from the quotidian and not just the grandiose

St Terese died of tuberculosis in 1897. She was beatified in 1923 and canonised in 1925. She is, inter alia, the patron saint of AIDS sufferers and a patron saint of France

A casket containing pieces of St There’s thigh and foot bones will tour 28 centres of prayer and worship in England and Wales, starting at St John’s Catholic Cathedral in Portsmouth today.
Canon Dave Hopgood, of the cathedral, said: “It’s a great honour, not just for Catholics and Christians but it’s a great honour for the city, too. “People will come not just from our diocese but from the whole of the South of England. She was just an ordinary person who lived an ordinary life extraordinarily well. She was one of the great saints.”

“St Thérèse has always been popular, I suppose for her simplicity and the very direct, almost childlike relationship she had with God and the fact that she was very ordinary and full of love for God and other people teaches us that everyone can be holy. I suppose we live in such a complicated age that people value the kind of direct approach she has.”

I parted company with the Catholic Church a good 30 years ago and I don’t often have good words to say about the church in general. A part of me finds the idea of touring relics rather strange but I am not going to be the one to sneer at the idea.
Posted by jams o donnell at 11:07 am

Okay, so at least I'm not alone in thinking this is slightly odd. I was raised Catholic but I just don't get it. Sounds like she was a truly decent person though.

It is strange in one respect but I agree with you. I thik she was a good person

No, I wouldn't sneer at the idea either.

That's why I'm going to be cremated, and my ashes gone with the wind. When I'm dead, I don't want to travel and be taken anywhere. Thérèse was pious and humble. She must be horrified that her thigh and foot are venerated. As an ex-Catholic (but still friendly) I'll say this loud: Not a good idea at all. Honni soit qui mal y pense!

Good point Claudia. I wonder what she would think of it herself.

Now I understand why my mother told she's not going to see St Therese of Liseux. I did wonder if it was time for the Alzheimers Test, but, seemingly, it's not. And it's not even as though her old hang out, the Manchester University Chaplaincy, is difficult to get to. Or Salford Cathedral!

Ah. My parents aren't heading up to Westminster Cathedral either