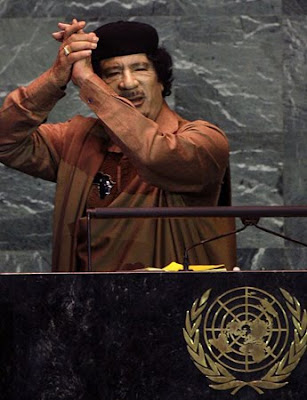 Muammar fails to impress with his walnut cracking routine
Err that should have been “bombs in New York” Surprisingly after 40 years at the top of the Libyan comedy circuit Muammar had never had the chance to play New York until yesterday.

Dressed in saffron robes and a black felt hat Muammar the Magnificent grabbed his 15 minutes of fame during an open mic night at the UN building in New York and ran with it. He ran with it so hard he stretched it to an hour and 40 minutes, six times longer than his allotted slot, to the dismay of organisers. 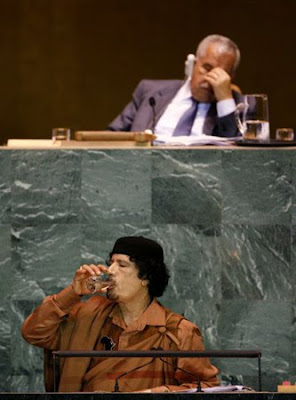 Sadly his ventriloquism routine did not impress either
Gaddafi fully lived up to his reputation for eccentricity, bloody-mindedness and extreme verbiage. Opening his act with one of his trademark acts of strength he tore up a copy of the UN charter in front of a startled audience he then accused the security council of being an al-Qaida like terrorist body, called for George Bush and Tony Blair to be put on trial for the Iraq war, demanded $7.7tn in compensation for the ravages of colonialism on Africa, and wondered whether swine flu was a biological weapon created in a military laboratory. At one point, he even demanded to know who was behind the killing of JFK.

Sadly Muammar the Magnificent’s trademark style did not go down well, Critics were united in panning his act agreeing that he had blown his chance of the big time after 20 years in the wilderness.

While it works for some acts he chose the wrong audience to insult blatantly. It was not a good idea to turn his wrath on to America, Britain, France, Russia and China - the permanent members of the Security Council, or "terror council" as he renamed it. Their veto was tantamount to terrorism. "This is terrorism, like the terrorism of al-Qaida. Terrorism is not just al-Qaida, it takes many forms.” 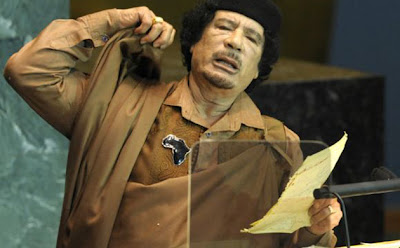 Muammar was distressed when he didn't get an encore
He then suddenly changed tack, heaping praise and devotion on the one man he appears to respect. "Now the black man doesn't have to sit in the back of the bus, the American people made him president and we are proud of that. We would be happy if Obama stayed president of America forever." Despite this it was clear that he would not be working in that town again

His agent made told an audience at a subsequent Q&A session that Muammar the Magnificent was suffering from severe frustrations having been banned from pitching a tent in Central Park. On a brighter note it was announced that he would be would be supporting Tommy Tiernan (qv) on a 16 date tour of Leitrim and Cavan in November. Tommy Tiernan is said to be relieved that he now has a support act guaranteed not to be funnier than he is
Posted by jams o donnell at 10:23 am

I have to have my eyes checked. I keep mistaking Quadaffi and Kieth Richards up. Which is the one that has the dreadful taste in clothing?

Why was it even given a forum?

Ah Beak, Keith has a more embalmed look than Muammar!

I suppose as a head of state they allow him. They should ahve had someone at the side with one of those crooks to hook him off stage after 15 minutes though

He is loopier than a box of Fruit Loops, that's for sure!

He would win some Oscars if he were an actor, what a crazy guy but unfortunately dangerous.

I see you like Belgian Beer, lol ! you know a lot !

For someone trying to clear up his own and his nation's image he's totally screwed up!

I do like a drop of Belgian beer... An excellent range, Further proof that the nation that put mayo on chips is civilised!

That must be the greatest speech I have ever seen. I was honestly captivated waiting to see where this plainly remote old man would go next. It’s really too bad that he didn’t just pick up a book of conspiracy theories and start reading them. It may have made more sense.

I wish I saw it Roland. It must have been a sight to behold!

Sums up the United Nations - They can't even stop an idiot from talking for six times longer than he was given to talk. What chance for solving the world's slightly more challenging problems? All it would have required would have been a switch to turn off the microphone (or a lever for a trapdoor... or a couple of flunkeys to rush on with a straight-jacket and a gag... So many easy options :-)

It would ahve been so easy. Perhaps they wanted to see if the punchline was a good one!

Muammar is a bit of a mad man. You don't even have to hear him talk - just see that little 'stache.

Yep, the entertainment value of King of Kings is going up. I was having big hopes re Mahmoud the Mad once, but he is too repetitive. KoK, on the other hand, is full of surprises.

He doesn't have much of a repertoire does old Mahmoud, still he could be a good warm up act to a real star like Muammar!