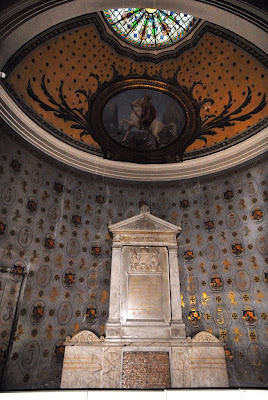 After a break of a few weeks I'm back in the hunt! The theme for this week's Photo Hunt is orange. Not being one to go for the obvious choice the above photo doesn't contain a fruit or a mobile phone which uses the mobile phone provider. There isn't much or any actual orange in te photo.

The tomb, which can be found in the church in St Germain en Laye, is the last resting place of King James II, the last British king to be removed from the throne. 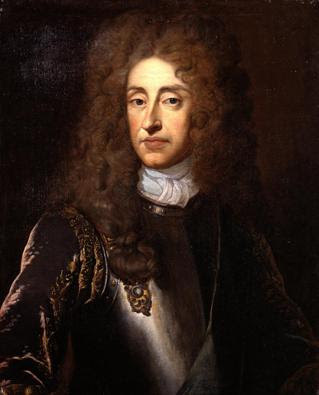 The younger brother of Charles II, he ascended to the throne in 1685. He was extremely unpopular for the following five reasons

He was deposed in 1688 during the Glorious Revolution (Called glorious perhaps because it was pretty well nigh the only revolution ever to be bloodless or at least not very bloody!.. That's not entirely true but show me a bloodless revolution anywhere)

He attempted to wrest back the throne from his successor. In 1690 he sailed to Ireland. He was defeated at the battle of the Boyne in 1690 and then, more comprehensively, at the less well-known battle of Aughrim in 1691. James subsequently escaped from Ireland leaving his supporters there to their fate. He was there after known in Ireland as Séamus an Chaca, James the Shithead (A title well deserved by the worst example of the useless shower that made up the Stuart monarchs)

James II ended up in France, living at the chateau of St Germain en Laye. He died in 1701

So what has this got to do with Orange? Well his successor to the Throne of England was ...


WILLIAM OF ORANGE!
Posted by jams o donnell at 1:00 am

Orange you taking a long bow here Jams? Interesting programme last night here in Oz on how Victoria came to be Queen. Her generation of Uncles would have kept Sun and News of the World Journalists very busy.

Glad you appeared on the hunt again. You really know how to captivate an audience, er reader. I had read the entire way before I got to the part where it says, orange. Happy weekend.

Very original idea for the theme and an interesting post. Great to see you back in the hunt.

Lovley to have you back in the hunt Jams!
Great take for theme and interesting post.

Have a nice weekend!
Anna

Welcome back, hope you had a great vacation. Thanks for the history refresher. I'd heard of Bill of Orange but had forgotten who he was.

I love your humorous history lesson!

Very different take - I thought that was where it was all leading!

Have a good weekend.

Very clever take on the theme :-)

have a great weekend.

Teeheeehee! Welcome back to the Photo Hunt - missed your wit and "stretchings" of the theme. And have to say that this week's post really was most informative. :)

welcome back to PH.

i learned something new today. thanks.

Nice touch on the history Jams. :)

Yes!!! Great story and I love the Celtic name you found for the loser.

Excellent tale for the theme :)

Welcome back to the Hunt!
I took a long walk to get to the Orange. :P

Have a great week!
Nita

Thanks that you told me about the wrong link ! I put another one in now, don't know what happened !

Well, you did work in the orange quite well really.

I guess Orange must be a place name, eh? Yes, I had already heard of William of Orange, but I didn't realize he replaced the last Catholic king. Now I get the green and orange thing! Thanks for the history lesson.

I don't know why you said you don't have orange in your post. The first shot has it, and re the revolution - don't forget that today it would have been called an Orange revolution for sure ;-)

superb take on the theme!

What a great post! William of Orange -- so very creative and appropriate for this week's theme. Nice information. Thanks for sharing.

Great bit of history...I sort of knew where it was heading, but I couldn't remember quick enough *who* of Orange it was...

Glad to have you back, my friend. You had me hanging on to every word from the beginning as I have no knowledge of English history at all: wondering what's the connection to orange until the very end hahahahahah

this bought back memories of my Grandmother who had a plate hanging in her living room of king William....I inherited when she died and I remember when i lived in northern Ireland my mum told me to hide the plate away :-) and its been hidden away ever since.... i may just have to go and find it now and will post a picture of it sometime :-)

Thanks everyone.. Sally definitely not one to hang out if you live on the Falls Road!

What a brilliant post for "orange" and a great history lessons besides!

Well, well, well. I used to live just outside St Germain en Laye. Memories, memories. :) I used to sit in the car outside the château for what seemed like hours on end, waiting to collect my husband from the station.

Very interesting take(s) on the theme. Love the segue into William of Orange.

Very clecer, an interesting take on the theme. Nice history lesson too.

Ahaha, thanks for the clever laugh! Love your post!

Enjoyed the history and had to chuckle over that nickname ~ oh my! Very creative and interesting approach to Orange.

Good thing I already had a fair idea where you were heading with that one! Nicely done. :-)

Welcome back to the Hunt!