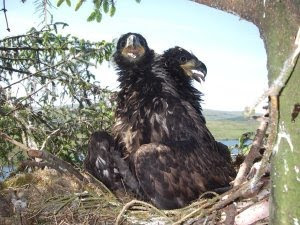 A sea eagle chick...
While I can imagine that the Daily Mail would talk about evil immigrant predators breeding like rabbits it is pleasing to see further news that the reintroduction of the sea eagle to the UK has been a resounding success. Today’s Times reports that the number of sea eagle chicks hatched in Scotland has reached its highest level in 150 years.

According to the RSPB 36 chicks were successfully hatched in 2009, eight more than last year. Two new breeding pairs were seen during its annual survey. The species was hunted to extinction in Britain in the last century (the last one was shot in 1918) but has been reintroduced to Scotland, where there are believed to be at least 200 birds and 46 breeding pairs.

The Sea Eagles Project to reintroduce the birds to Scotland started in 1975 and involves RSPB Scotland, Scottish Natural Heritage and Forestry Commission Scotland. Last year 44 pairs of breeding birds produced 28 chicks, a record year for the species since the project began. In 2009, two new pairs were found on the Isle of Lewis and Lochaber. A further 20 young birds will be brought to Scotland every year for the next three years. 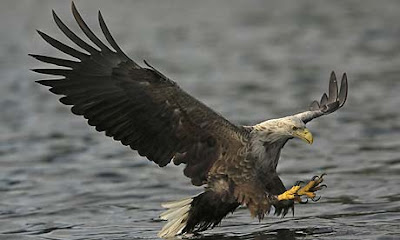 ...grows into this magificent creature
Five of the eaglets will be monitored to help wildlife experts understand more about their habits and keep up with their progress. The chairman the Sea Eagle Project team, Colin Galbraith, of Scottish Natural Heritage, said that the record number of the birds now living in Scotland was important progress. “This is the result of a huge effort by many people over the past 30 years, he said. It shows what can be done to reinstate a key part of our natural heritage. It remains important however for the population, especially the newly released birds in the east of the country, to be allowed to fully settle in and establish territories.”
Posted by jams o donnell at 11:37 am

My friend just returned from Alaska and reported that he saw FOUR off a peer. It's good to hear.

Wow I would love to have seen that Pouty!

That's a grand bird indeed. All the lack to Scots with the venture.

I wish the scheme luck too, Sea Eagles habe been released in England too which pleases me intensely